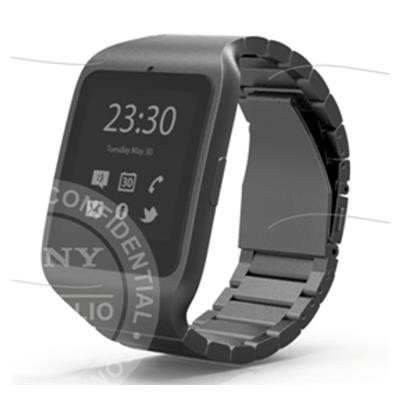 We heard at the Sony Xperia Z3 launch event that Sony would be releasing a stainless steel band for the Smartwatch 3, and this could be it.

The above image popped up in a thread at XDA Developers a couple of weeks ago, but escaped wider notice until this week. The poster promises it’s real, but you can make your own mind up about that (there’s a confidential stamp/watermark on it and everything!).

The structure isn’t a huge departure from the other bands Sony’s got up its sleeve for the Smartwatch 3, which allows you to pop the main watch body out and place it into a new band. It appears to be a full circular band with a fastener somewhat typical for that kind of band (although it appears to be inside the band rather than outside), and hopefully it can have its size adjusted to add/remove links. This form probably works well with the Micro USB charging port in the back of the watch.

What’s interesting is the watch face, which appears to have shortcut icons for services like Twitter and Facebook. This is functionality that hasn’t been seen on an Android Wear watch before, and could be something to do with Sony’s default watch face or simply an artist’s impression.

Will a stainless steel band sway you in the direction of Sony’s new Smartwatch 3? Tell us in the comments.

I would definatly buy one if they offer a stainless steel band, preferably in black…ge

got my Moto 360 Last night from US (luckily a friend was coming from NY), was very nice but i noticed that there is a bit of glare on the edge of the screen due to bump in the glass

And Sony wonder why they are having issues as a company….always late to the party. This was looking to be cool device if heart monitor is in fact included. But now Microsoft has upped the anti with their smartband at 199. Granted its US only but looks pretty compelling should it get rolled out globally

Hmm, I doubt I would get one but this take it from no way on earth to I can’t justify any more android devices.

Has there been official confirmation on the inclusion/exclusion of a heart rate sensor for the SW3 yet?

Sony has said there’s a heart rate monitor, but it wasn’t present in the watch I played with at the launch event.