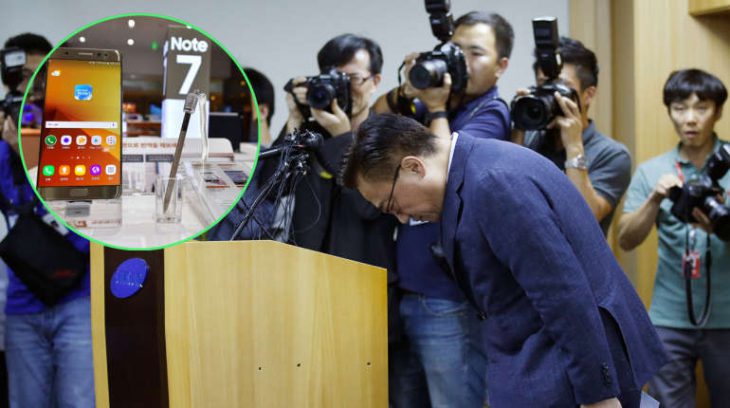 Samsung Mobile’s chief DJ Koh has been with the company a while, since 1984 in fact, and he has achieved great things while in charge of Samsung’s mobile division, counting the Samsung Galaxy S6 and S7 lines and the Galaxy Note 5 amongst his successful launches. However, the Note 7 launch was anything but, leaving consumer confidence in Samsung Mobile in a rather unhappy place.

Appearing above in a media conference in South Korea, Koh undertook that he “would at any cost find the exact cause (of the faulty Galaxy Note 7) to restore trust of consumers so that they can use Samsung products without any safety concerns.” Koh admitted he was frustrated over the Note 7 crisis, and apologised to the assembled press, and through them, to Samsung customers worldwide.

While Koh has headed the mobile division since 2015, just under a year ago, it seems his time might soon come to an end if reports from Korea are to be believed; rumours are circling that the Samsung Group may remove Koh from his post in holding him responsible for the Note 7 fiasco.

Whatever move Samsung makes next, customers and the business world alike will be watching. With just a few short months until Samsung’s next big reveal, there’s not much time to turn the mobile business fortunes around.

Whoever made the call to rush the Note 7 out the door to overshadow the iPhone 7 needs to take responsibility. If Koh has to go, so be it. Samsung have set themselves back several years with one fell swoop.

That was such heresay in my opinion to make clickbait. I am yet to find a credible source that proves it happened. I’m not saying it didn’t but none of the media reports I read were able to provide any solid enough reporting to make me believe it happened.

I dont know that it was the problem mate , i`m not saying it is not , but these phone company/manufacturers are always under the pump to get stuff made and onto the market , and usually are very very good at it , and i would say that goes double for samsung knowing the amount of devices sammy puts out on the market .

The most rubbish mobile phone in the world. Luckily we don’t have anything made by Samsung at home.

I have had two galaxy notes and both have been problem free as far as the hardware goes, all phones have the occasional glitch in the software , but nothing of any consequence.
I still use my 2014 note 4 today , great devices i wouldn’t think twice about buying another , obviously the note 7 is dead and buried due to the current saga , but if a revamped note comes out next year , i will certainly have my eyes on it .

Surprised that they still haven’t figured out what is causing the batteries to burn up.

That’s kind of scary, because if they don’t know what is causing it, that means there’s a chance that same flaw could be in future Galaxy phones without their knowledge.

I guess the worst thing is they sent out v2 Note 7s without really knowing what was causing it. That to me indicates arrogance, not intelligence.

Giving them the benefit of the doubt, they likely thought they had found and fixed the problem, but it either wasn’t the whole problem or introduced a new problem! The only thing they did wrong was rush out replacements without testing them first! No way you can fault find, re-engineer, test, re-tool, and manufacture in a few weeks!!

Yes it does make you wonder what is going on, i find it strange that if it was a simple inbuilt manufacturing fault , there would have been thousands upon thousands of them going up , but at what little facts we have to look at , it seems somewhat random in the way the problems occurred.
I think samsung needs to be forensically dedicated to dismantle as many note 7 devices as it takes, even if it costs another billion to find what ever caused this event.