We’ve run down to the store and bought a few Daydream Views today, what’s the first app we tried? YouTube? Nope. Magical Beasts? Nope. Google Cardboard! You can’t know where you’re going until you know where you’ve been, apparently.

After initialising our Daydream View we jumped into our library and were somewhat disappointed, but not entirely surprised, to see Cardboard wasn’t there. There has been a lot of speculation if Cardboard, and its apps, would be allowed inside Daydream. After all, those experiences were built for the last gen platform.

Just to make sure we booted up Google Cardboard and were much surprised to be greeted by this: 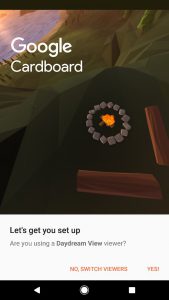 We clicked the Daydream controller to pass the entry screen, we clicked another button, we clicked all of the buttons in an increasing frenzied and random way. Alas, while we were able to get Cardboard to technically run inside a Daydream View, Cardboard could not recognise the controller input, and we didn’t have any other way to interact.

We reached out to Google for comment and were able to find that Google’s Cardboard team are working on compatibility for Cardboard to work with the Daydream View headset and controller. Google will be releasing a new Google VR SDK with will be available in the coming weeks. This new SDK will include a new API that allows Daydream controller to act as the ‘Cardboard Button’.

While it may be a little disappointing that Cardboard isn’t working at release, there is a lot of great content already out there so I wouldn’t worry. I think it’s a good strategy to have Cardboard support Daydream View rather than Daydream VR support Cardboard. But launching a separate app, it lets you know that these experiences may not be as polished as a Daydream certified app.