Sleep, just like battery life, is something we all want and most of us probably don’t get enough of it. Unlike your phone’s battery, though, you actually NEED sleep to stay healthy, and in fact, less battery life may be better for our health! The “quantified self” movement has for some time now been obsessed with tracking sleep, but up until now, this has normally required either additional hardware or for you to literally sleep with your phone, but not any longer.

Enter Sonar from Sleep as Android. Announced today Sonar, as the Switzerland-based development studio have dubbed it, uses your phone’s microphone and speaker to track your sleep. How you may ask? Well, I’d say with sonar, by playing an audio tone just outside the audible range and then listening for the return sound, the team at Urbandroid have been able to create a 1 m distance motion tracker and then adapt that to track sleep, no wires, no additional hardware.

Check out their announcement video.

As someone who often doesn’t get enough sleep, the news doesn’t write it self you know, or often wakes up feeling unrefreshed I am very interested in sleep tracking but could never let myself sleep with my phone, now I don’t have to. I’ve reinstalled Sleep as Android and I’ll be taking it for a test.

For those unfamiliar with Sleep as Android, it is undoubtedly king of the Android sleep tracking category, with integrations with Google Fit, Google Drive (via a plug-in) for cloud sync data, Google Calendar, Tasker, IFTTT, Hue lights and more that I can list, it is a powerful tool based around your sleep. If you want an app to do something around getting to sleep, sleeping or waking chances are Sleep as Android has the feature you’re looking for.

If you want to try out Sonar or just the Sleep as Android app for yourself grab it on Google Play below. 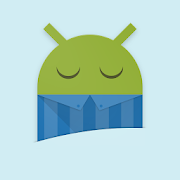 Do you use Sleep as Android? Let us know what you like about it.

Calls for TikTok to be banned in Australia — is there any truth to the reasons why?

Been using SaA for years but haven’t used sonar yet. I stopped putting my phone on my bed a while back but I this was a reminder to try out the new feature.

From what you are saying about your own sleep problems, you really should talk to your doctor and get referred to a sleep specialist. Sleep apnea is more likely your problem and once using a machine you’ll have more data about your sleep than any app can give.

Nah, going to bed late, waking early and having kids wake you does not a good night sleep make. I don’t fit the Clinical profile of sleep apnea. Thanks for the suggestion, very considerate.

I tried this out a while back (part of the Sleep as Android beta group) and the “audio tone just outside the audible range” was actually fairly audible. After one night my wife asked me what that annoying beep was and to turn it off! Maybe they’ve improved it since the beta version, if not then it’s not much use unless you’re half-deaf.

I hope that’s not the case, as I’m not sure my wife would be so forgiving

Update on this: I tried Sonar again last night and it now gives you an option to test and asks if you hear any audible noise while it’s running. If you tap Yes it tries again at a different frequency, which I couldn’t hear and so tapped No when asked, as a result it chooses that frequency. Had it running last night and no audible noise from the phone or the wife! So looks like this is a great feature now.

Battery usage??? Can i put the phone in charing dock? My wireless charing has a Fan underneath.

test it out and let us know!

ABOUT US
Ausdroid is an award-winning source of Australian technology news, focusing on smartphones, mobile devices, accessories, personal computing and more. You can also find Ausdroid's staff on TV, radio and in print.
FOLLOW US
© 2010 - 2020 - Ausdroid Media Pty Ltd, ABN 93 162 673 789
wpDiscuz
9
0
Would love your thoughts, please comment.x
()
x
| Reply
You are going to send email to
Move Comment