As 2017 is the year of the leak it would seem likely that we are going to start to see a lot more leaks on top of what we have already seen. We have seen three devices originally rumoured before we heard that one of them was cancelled leaving the “Walleye” and “Taimen”. The Walleye is apparently being manufactured by HTC and the Taimen by LG.

Today XDA Developers have obtained information from a source who has become familiar with the Pixel 2 software and are actually confident in the accuracy of the details provided and at this late stage are unlikely to change. Read below to see them:

The Taimen is the larger of the two devices and is rumoured to be manufactured by LG although this leak we saw suggesting that may mean that just the display itself is manufactured by LG, after all we did see Google invest heavily in LG display OLED production lines.

The display itself is apparently a 5.99 inch 1440P OLED display which has been manufactured by LG. There is no mention of the display ratio although there was mention that the bezels on the phone are smaller than they wer for last year’s Pixel phones. There is a 128GB version but there may well be other storage options. In what is NOT a surprise, the processor will be a Qualcomm Snapdragon 835 clocked at the reference frequency of 2.45GHz.

The design of the Pixels Gen 1 is polarising and looks set to be very similar next year although the glass window is located near the top of the device and no longer houses the fingerprint sensor. The glass top does house the single lens camera though along with the dual LED flash.

The Walleye is the smaller Pixel device apparently manufactured by HTC. Unfortunately, with HTC come bezels and the design is said to be nearly identical to the original Pixel including the massive oversized bezels. Inside these bezels will be a 4.97 inch FHD display — disappointing. In further disturbing news Google is apparently planning on doing away with the headphone jack and replacing it with stereo speakers.

The Walleye will also be sporting a Snapdragon 835 and 4GB of RAM with a 64GB storage option. 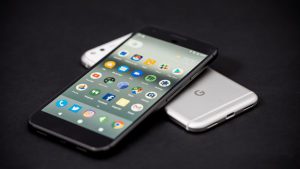 Other news the XDA Developer source provided was that inside the software for these two devices the Taimen uses the name Nexus Imprint (that’s what Google called the fingerprint sensor software in the Nexus devices) while the Walleye referred to it as Pixel Imprint. This may just be a hangover from the last time LG made a phone for Google — lets hope that the Taimen is received a lot better (and is a better phone) than the Nexus 5X was.

After Google made such a hit with the Pixel devices last year I find it very disappointing in these leaks. The bezels on the Pixels are far too large and the only devices that need these sized bezels are those with a fingerprint sensor on the front. To go down the same path shows a poor design skill in my opinion. The best looking devices this year are the LG G6 and the Samsung Galaxy S8 and guess what? They have tiny bezels.

Every single flagship (aside from the Galaxy S8) this year is including dual rear cameras — some more successfully than others. For Google not to include it may be a mistake — even Samsung are apparently jumping on the dual camera bandwagon, including them in the Galaxy Note 8.

I’ve owned two Nexus phones, the latest one being the 5X. Google will really have to come out with something great to tempt me back because the 5X has been diabolically poor in my view.

Once upon a time, I used to wait with abated breath for news and/or release of Nexus (Pixel) phones. I saw them as a value for money way of getting into decent/premium hardware. Somewhere along the line, Google decided to put money in front of technicality, in front of what could be done with the hardware. Sorry Google. I am one Nexus/Pixel owner who will not be joining the new rush.

i must admit I am a bit disappointed in these specs too.i was really hoping for a dual camera-toting, 18:9 ratio AMOLED display….

Why is the Pixel having a ~5″ display disappointing Scott? Not everyone wants a large smartphone.

not the size that is disappointing but the resolution. For what is a premium phone it should have 2K imo. The price sure as hell will be premium, we know that.

This is not sounding good at all so far.

Sounds like the two phones will have different designs/features. One having stereo speakers, one having 3.5mm jack etc. This sounds lazy and unplanned. Seems like Google didn’t actually design anything and jilust got HtC/LG to slightly modify their existing phones and they’ll whack ‘Pixel’ on it.

yeah its totally different to this/last year which is strange… Maybe Google is trolling us??

i wasnt either until i used the LG G6. The sheer usability gained by having the 18:9 display is fairly high.

My 6P still looks good to me, and will get Android O (it is running the dev preview happily at the moment). If these specs are correct then it isn’t going to be ground-breaking and I agree on the design – small bezel FTW. If the only thing that sets it apart from a Samsung or LG is that you get upgrades earlier, then it won’t be worth shelling out $1100-1300 for me.

Sounds somewhat disappointing to me. I need to upgrade my Nexus 4 that still works OK but the battery is letting me down. I have my eyes on the HTC U11 though it hasn’t been released in Australia yet. There’s also the G6 and the S8. I was hoping that the new Pixel phones would be outstanding, if not, I won’t wait for their release.

As long as the Taimen has smaller bezels and IP68 I’m in.

One of the fastest and smoothest phones I’ve had is my Huawei Honor Note 8. 6.6″ screen, 3-4day battery life (with location services, wifi, mobile and bluetooth all on), above average camera – probably av now 🙂 The ONLY niggle is when bluetooth is toggled or connects disconnects to the car Huawei’s EMUI skin sets the launcher back to the default. That’s a pain because I prefer Smart Launcher Pro 3 – auto categorisation of apps is great when you have a 100+ and they’re sorted the same on my tablet and my phone. In my next phone I want… Read more »

Having the ‘nexus! Name isn’t enough to set it apart from the other phones. It needed to be next gen. The 835 can be acquire from other phones….

But I’ll probably still upgrade to it lol