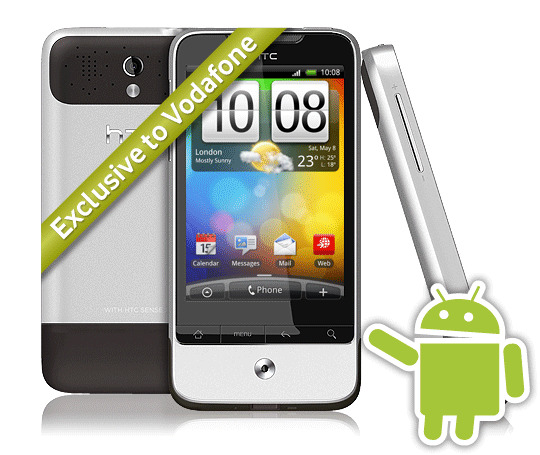 Ahh yes. The news we have been dying to hear about for months. VHA (Vodafone + Three) has finally officially announced tonight, the HTC Legend. As well as the all important pricing & availability. Other interesting tid bits are also included!

Hit the break for all the info!

Vodafone have also announced 1GB data packs for $9.95. Which is extremely good value!

The Legend will be available for purchase through Vodafone from June 3rd (next Thursday) on a 3 month exclusivity deal.

It will be available on Three “soon”. So we shall keep an eye out 🙂

HTC have said that they are doing some exciting stuff in 2011. There is an endless list of what this could be, but I suspect the use of Scorpion CPUs, Surround Sound, 1080p video recording, with a bit of Windows Mobile 7 stuff thrown in, but that’s useless to us 😛

Is there any chance of this phone being reduced to $0 on the $29 plan any time soon?

No price changes that I’ve heard of yet, no.

Ok, i saw that it was exclusive to vodafone until august. Then it was being released on optus, is there a chance that this may lower the price?

Not in three yet! Even that is no timeframe in their webpage.

It’s not on their website? The store was closed last night from 12am until 2am, and I waited up and when it came back online at 1am there was no Legend 🙁 and this morning there is no Legend. 🙁

Nathan 99% of people working the stores are idiots that take no interest in their job and don’t know anything.

I’ve been to 4 Vodafone stores in the last 2 days and none of them have got any idea about when the Legend goes on sale, one even told me HTC is still undecided on who their giving it to and another said it should be in the next few months. Are they playing dumb because its less then 48 hours until their suppose to be selling it or is there a chance that it could be delayed?

Dave from Vodafone posted in our forums just to confirm it all this morning.

What’s the chance of Three releasing it on a $29 cap? But even if they do, you still need to add a data pack to make use of it.

In the past, Voda & Three plans have been almost identical. So if it’s on a $29 cap on Voda, Three will have it also.

I was going to switch from Optus to Vodafone for this phone, but not at $49/month with a useless 50meg of data when i’m currently on a $19cap. I was expecting the Legend to be a direct replacement for the Magic on the $29 cap. I think i’ll have to settle for the Quench on the Optus $19 social plan with 100meg of data. I know it’s not as nice as the Legend, but the specs are pretty similar and it should get an upgrade to 2.1 later this year. I’ll be annoyed if Optus brings out the Legend at… Read more »

yeh i’m undecided hey. i was really looking forward to getting this phone, but $49 might be a bit out of my price range especially with bugger all data. I’m on a Virgin $29 cap at the moment and never go over so another 20 bucks and less data seems stupid.

if you prefer a proper keyboard, it might be worth it – personally I think all the new Motorolas they brought out are a bit slow

if it was running2.1 i would have bout it already 🙂

Galaxy S has been launched in singapore. Released 5th June there… so there is a chance that VHA will have them soon? I hope

is there any data on the 49 cap? or do you have to buy separately?

a measly 50mb or you can pay $60 and get a gb, might as-well get a desire on crappy telstra.

screw this..how about the Nexus One rumor?

The Legend is yesterday’s news. It lacked features, speed and stability even when it was released in the US back in March, and it sure as hell hasn’t improved since then. Having used one in the flesh I can tell you that this phone is SLOW SLOW SLOW!

I have two friends who have HTC phones, one is the Legend and the other is the Desire.

I have used both and the speed difference can hardly be noticed. To describe it as “SLOW SLOW SLOW” is a bit much IMHO.

I think I will be getting the Legend when I am up for renewal, unless the Nexus One comes out free on the $49 plan too (which I doubt).

The Legend is certainly NOT slow. One of the best phones out, and affordable.
Looks better than the Desire. The Desire may have the snapdragon, but I fail to see the difference speed wise having used both phones.

any clue when it will be available for Three?

No clue. All the press release says is along the lines of “coming soon to 3 Mobile”.

On that note, I’m out for the night.

Is that exclusive to Vodafone only, or does it include Three as well?
$599 is close to what mobicity were selling them for before the $A dropped (now $659!). At least Three provide a 2 year local warranty.

It includes both Voda + Three.

Hopefully we’ll hear about the Nexus soon, since HTC didn’t confirm FroYo for this.

HTC did confirm Froyo for all 2010 smart phones and specifically listed the legend as a recipient.

Look out for the legend.. the sharp edges on this thing will take chunks out of your ear if you’re not careful 🙂

Any news which cap it will be free on

No word as of yet, I only got this info seconds before I posted it.

Will see what info the Vodafone Twitter will give me tomorrow