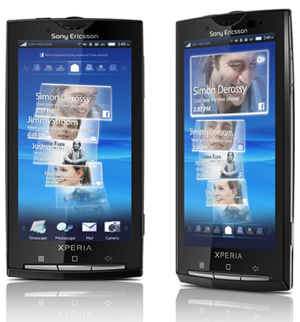 Sony Ericsson have said on multiple occasions that the Xperia X10 would be getting an update, then they finally said it would come in Q4. Now they’re saying that it will be here in Q3, and with updates (read: much needed overhauls) coming to their flagship MediaScape & TimeScape applications in Q4.

Nothing new has come from them in terms of what will be updated, but we know that the X10 will receive 720p recording capabilities, as well as the software benefits that Android 2.1 will bring (Hardware acceleration, etc..)

Now all we need is a specific release date for each carrier, but we won’t be hearing about that for a good two months or so.

when is the x10 getting the new updates we were promised. not the 2. 1 updates but the updates to smooth out glitchs to the camera and the timescape. most of the world has got it. I have read that we were meant to get a msg in our status bar telling us to update to the latest version. Sony Ericsson is pissing me off.

India already got their updates, when Aussie will get it?
btw will the update available for branded phone too or will it be available only for unbranded one?

The Android 2.1 update will be available for both generic & branded phones.

the Sony Xperia x10 mini is coming to Vodafone, free on a 29$ cap, it will be released in Q3, and as early as July.

any news on the X10 mini/pro release dates?