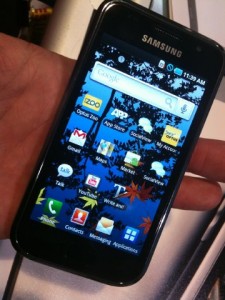 If the above picture from Techanist doesn’t confirm (see the “Optus Zoo” & “My Account” apps) the fact Optus will roll-out the Galaxy S from the 1st, maybe Optus’s offical word will.

Optus have informed Gizmodo of the release, and even given them a device to test out (don’t worry, I’m getting mine tomorrow ;)). The Galaxy S will be available on the $59 ‘Social’ Cap over 24 months with an includes a nice 1GB of data per month. That’s possibly the best deal ever!

For those of you wondering on the specs:

Psst: If you don’t like Optus, both Telstra & VHA will be picking it up after the exclusivity with Optus is up.

“Update: I have received a tip pointing towards an outright price of $549, however this is not confirmed.”

“Ausdroid, what the hell is that?!”

Haha, nah righto mate, should have a review up this weekend. I’ve decided to do it in one post like the Desire review. So if you don’t like reading >3000 words, split it up into categories yourself 😛

You mentioned that”both Telstra & VHA will be picking it up after the exclusivity with Optus is up”. How long will that be?

They have the exclusive for one month, so soon after that.

Also, I have the Galaxy S in hand. Going to play with it all tomorrow then start a review tomorrow evening 🙂

yeah ive found if you go to places that sell optus(or other carriers phones) not to oput store you can get some better deals if ur willing to bargain. or if ur already a optus customer go to them and they might do u a deal to keep you happy. last time i was with 3 on the $49 cap and got a phone off the $69 for $0

Haha the price of all the other Android phones have dropped on Optus… Can they actually bring Galaxy S that low? The X10 is still the same though.

Yeah it’s weird for Optus to be doing all of these great deals…but at the same time it’s good because as spoco said, it will drive the prices of the mid-range phones down.

Now, if only Virgin would catch on and offer some great handsets. (not going to hold my breath)

With Virgin and android, all i can say “watch this space”

what ya know Lucas?

It’s an awesomely specced phone with just too much iPhone 3 styling in physical and Android customisation senses.

I’d still get one… except I’m in the bracket of $30 or less monthly plans. So while I won’t get one of these its price is awesome as it puts pressure on more ‘mid range’ phones to be priced into my price bracket… Huzzah!

I can’t believe that Optus of all are doing the best deals at present.

i really like this phone, its a great price and seems to run quite well. I just dont like the look

what do you do with all the phones you get given? I say you should have a competition and give them away! many of us want an android phone!!!

Review devices are sent to me and I have to send them back after a week or so, that’s how it works. Very rarely does someone give you a device for nothing.

ohhh…. and here i was thinking you were hording robots for yourself buzz!! hahaha nah i figured you had to send them back or something

great news buzz, i’ve been following this the galaxy S for a while now, and it’s definitely top 3 (droid X, EVO 4G, and Galaxy S) few questions: – any news about the galaxy s Pro (physical keyboard)? – what limitations does optus have on the unit? – my HTC Dream bought from optus, after 1.6 update, they disabled google search widget to return results in contacts or apps installed – couldn’t install voice data in the text-to-voice in the settings After all the pain i’ve gone through from optus’ sad dealings with android phone owners, i swore that i’m… Read more »

i had a dream form optus and had none of the issues that you talked about, the only issue was the lack of paid apps, and this has been resolved, i have also tested every other android handset from optus and none have any of these restrictions

When do think you will have a review up on the site?

If I can get the phone by tomorrow, Friday night if not Saturday morning 🙂

Optus have great coverage, but in places their network is congested and slow

Milestone has disappeared off the radar.