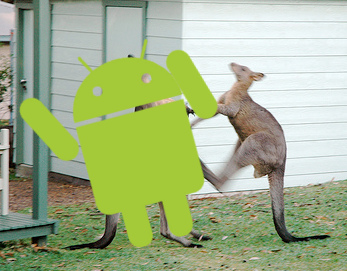 So you may have noticed there aren’t all that many Apps made by Aussie Developers on the Android Market, and the ones that are there are all free apps. But why is that?

During the 5 day Google Developer event (DevFest) held late last month in Sydney, there was not a single workshop on Android. Which doesn’t say much about Google and their efforts to push Android globally.

Although, when we pressed Google AU in early June for any word on paid Applications for Devs in Aus, they responded with this:

we want paid apps for devs too but it takes a while to roll this out, we don’t have a timeline for this yet

Looks like we’ll just have to sit and wait..

Can only hope that means it is coming soon….

Because Google are leaving this golden-staff-like gaping hole open for so long some startups are stepping up to satisy, e.g. http://www.androidconnector.com/
…problem is, trust and some percentage of revenue has to be extended to the third parties :/ Still not a satisfying solution!

“How did he/she get around it?”

I read about a re-seller service that will publish your app for you from an approved country, and take their cut as well. I can’t find the link now, sorry 🙁

Search Aussie Weather in the Market. It was a BOM display client for satalite weather images but a new varient has just been released with widgets.

Its a paid app (presumably from an aussie developer).

How did he/she get around it?

I paid for it partly to support the first aussie developer with a paid app on the market – but I do use the free version all the time.

I suggest anyone who is ‘fair dinkum’ to do the same 😉

Sometimes it baffles me how bad Google are at things. Our company uses Google Maps in one of our apps, so we wanted to use the paid, enterprise version… you’d think this’d be a simple case of signing up online for it and making a payment. Nope For the paid version you end up having to talk to some local rep company who sign up on your behalf, and then submit the domains you want to use to them, and then wait… and then wait some more… and then find out they got the domains wrong so it doesn’t work…… Read more »

So i have a HTC desire
I am constantly frustrated by the fact that every app i want is not made for android.
I wish i didnt recontract with telstra – what a mistake
I only did it becasue they told me there is no next G with iphone so rubbish rural coverage
I think i will make my partner recontract with an Iphone next week.
I want some of those apps on our aussie holiday.

I am an Aussie app dev and actively developing applications for Android. I’m curious to know which apps you are looking for which are unavailable on Android? I’d be keen to know where there are some gaps/opportunities.

well, lets hope for a rollout of this before year’s end! early september I’ll be looking out for my first Android handset… as above, so below, Google please make it so!

they should enable paypal payments for apps …easy!

Its short-sighted I think. If Australian developers are interested in Android (by virtue of potentially making profit from app sales), then they will also promote Android at a local level which will help the adoption of Android here.

if the gov backs off on the internet censorship they will probably have it up and running in a week! I get the feeling they don’t like Aus much because of this at the moment…

Im hoping that they do get on board with Australian Paid apps from developers. I’m doing a little poking around with the SDK and i hope to try and make something, and a little financial incentive could help me develop and support an app i make.

And it actually dampens the case for owning an Android phone to some degree because there is a lack of Australian content based apps on Android.

+1 To this – if they really want Android to be a successful and competitive platform they should work on arrangements with paying developers in as many markets as possible. Especially Australia, now with the price war between telecoms over their leading Android handsets. One of my mac fanboy friends found this out and was like “wtf is with that” – it was a little embarrassing!