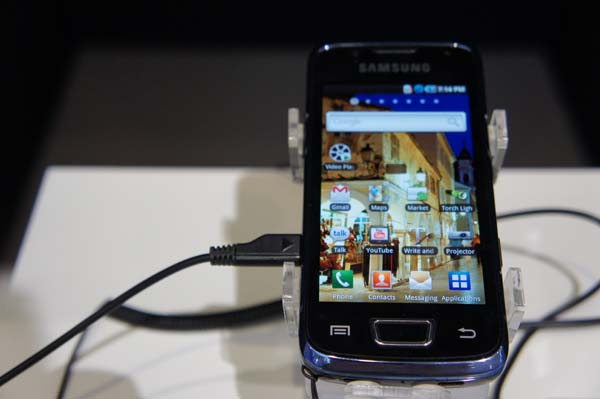 Although the release of the Samsung Galaxy Beam isn’t all that likely to happen here in Australia, it’s still a pretty cool device. Packing in a pico projector capable of projecting a 50″ image, 1GHz CPU, Android 2.1, 900/1900/2100MHz 3G, 8MP Camera & a 3.7″ AMOLED display.

When Nick Broughall of Gizmodo asked Samsung about an Aussie release, they gave a pretty definite answer:

“There are currently no plans to launch the Samsung GALAXY Beam in Australia, however, if consumer interest or demand is there, we will review the situation.”

Keep reading to check out a video of the Galaxy Beam in action.

What are you aussies waiting for. I imported one 2nd week of release from Singapore and i’m in Auckland NZ!

Brilliant phone, the downside compared to the other androids is reduced ram (384), cpu (720mhz, can be OCed however) and its larger weight and size. At 150g and 14.9mm thickness it is quite a bit bigger than say Galaxy S at 9.9mm and only 120g.

Basically not as speedy as the better androids, not sure why they did not put the hummingbird in there as it would make it the true king :p

Is quite a bit bigger so I can not see why heat would be a problem. Most likely they do not want it to compete head to head with the SGS. Who would go for the SGS if the SGB could matches its performance easily :p

There are a ton of people interested. I would get one its a portal mini computer and entertainment centre what kid/teenager/adult would not want this .. its an all in one with bonus of a 50 inch tv.. it would sell like hot cakes!! Must be something wrong with it .. else this has a total competitive edge over Iphone/htc phones why not.. btw MobiCity dont have it thats an SEO scam.. If you go to singapore they do but they are on back order 🙂 Wonder if a singapore phone will work in AU??? Anyone?

No doubt you’ll be able to get it from MobiCity when it’s released: http://www.mobicity.com.au/catalogsearch/result/?q=galaxy+&x=0&y=0