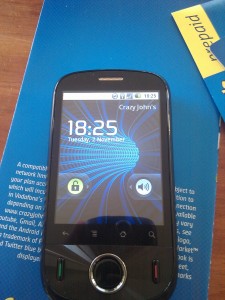 While the full review is a little way off, here’s a sneak peak of what’s in store.

The IDEOS is a diminutive 3G/HSDPA-capable Android 2.2-powered handset with similar form factor to the HTC Wildfire.

It’s small, easily fits in the hand – and while it might lack some of the hardware polish of a more ‘name-brand’ device, the IDEOS – as you will soon see – holds its own, especially considering the bargain-basement price of $159 outright on the Crazy John’s network. It’s quick, snappy, functional, and importantly, performs well as a mobile phone as well as a mobile data device.

Hmmm… I’m torn between getting this or ordering a motorola defy from clove for about $450 (and yes, I realise the defy will most probably never see froyo).

I can confirm the review unit supplied by Crazy Johns is unlocked. Loaded up my Telstra Business SIM with no issues.

I can confirm this is awesome.

does it have a whole bunch of crappy telstra apps that you can’t get rid of without rooting?

There are no carrier specific apps on the IDEOS – it is stock, vanilla Android 2.2.

Yepp, the first batch that Aus Post is carrying is unlocked, and selling for $159, and comes with a 4GB Micro SDHC card. The Dick Smith ones come with a 1GB card, and are selling for $229.

I repeat, the current Aus Post stock is unlocked, and selling for $159. You won’t find a better bargain at this price.

The first batch of this item is UNLOCKED. Me and many in whirlpool forum confirm this!

I can confirm that the secret was safe with me!

Dick Smith stores all carry this, even the small ones/Tandy stores. $229 outright and it is currently on promotion.

Looking forward to the full review. I have a Huawei wireless modem and it has done sterling service for 3 years, so it’s not a dodgy Yum Cha manufacturer. This is definitely the leader in low-end Android phones and I’d buy one today if my dumbphone was dying/dead. Might prefer a slightly larger screen, I dunno…

Look forward to it being posted probably *looks at calendar* probably early next week. It’s mostly written, but I want a few more days to really put it through its paces 🙂

Take your time! The closer you look, the more you have to report on 🙂

Looks cool. The ex is looking to get rid of her old Samsung and I am trying to get her onto a Wildfire, so this might be the deal-maker…except I know she really likes the size of my Desire. And I will leave that statement open for interpretation, lol…

I think the LG Optimus One is HVGA. But that’s not nearly as cheap as this. Cheaper than the Wildfire possibly.

I just saw two on the shelf behind the counter at Surry Hills post office.
> Capacitive
yes, 100% The touch sensitivity is excellent. (no multitouch though)

Despite same CPU MHz as Wildfire, the U8150 CAINS the Wildfire in performance! Also the smaller screen size means you don’t notice the individual pixels as much as you do on Wildfire. Aaaand the screen isn’t as white as the Wildfire (so blacks are blacker on the U8150). To me, it seems HTC best be releasing 2.2 for the Wildfire damn fast to try and compete.

JIT is excellent for power.

It is indeed QVGA

can anyone confirm which AusPost stores have this in stock? thanks

I’m not sure on specifics, so I’m guessing any major Aus Post store.

I love how cheap Android phones are getting!

I’m with you on that.