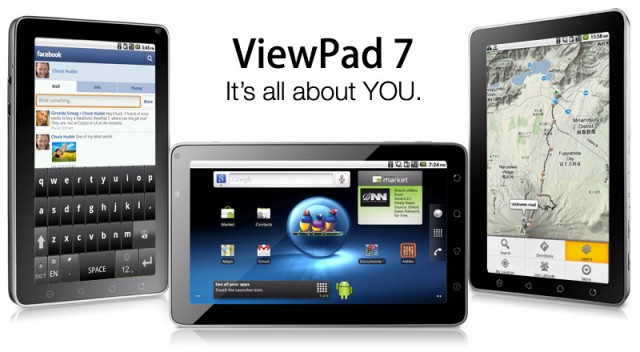 Viewsonic Australia today announced that it will be launching the ViewPad 7 and ViewPad 10 for $699 and $799 respectively. Which seems priced better than the Galaxy Tab.

The Viewpad 7 is the 7″ tablet that runs Android 2.2 and is targeted towards the personal user. Like its rival, the Samsung Galaxy Tab, the ViewPad 7 can make and receive calls via the speaker phone. See if the following specs whet your tablet-desiring appetite..

The ViewPad 10 is the 10″ tablet, which is more my style, and runs both Android 1.6 and Windows 7 (I’m onto a winner, if rooted) which Viewsonic are saying is for a more business orientated market. The specs on the Viewpad 10 are also a tad better than that of those on the Viewpad 7, but once again it’s all personal preference.

Those specs aren’t all confirmed as Viewsonic are only releasing some of the specs before the device launches January 2011. It’s nice to see both Windows & Android in a tablet, more than likely thanks to Intel’s initiative to bring Android 2.2 to Atom powered devices.

Personally I wouldn’t mind a Viewpad 10, if it’s rootable. No carriers have been announced to stock the devices, so more than likely they’ll be available from all the usual electronic retailers. We’ll keep you informed when we hear more.

whats with all the old news?

Not enough memory especially with 1.6
Too expensive
Why is it that so many android devices have so little RAM ?

Forget the Viewpad, bring on the Viewsonic G Tablet.

After having played with a LG Optimus one, the 600mhz and 2.2 can work quite well. I would ride of the 7 inch.

if it was faster, better res, it would b good, so not good for this price. almost there android guys

I’ve played with the Hanvon 10″ which runs win 7 – needs something like a Blue Dolphin Overlay as win 7 buttons etc are too small.

Not too sure, it could be 2.2 by the time it launches. There are videos of it running Win7 just fine, which is always good.

Does anyone know of a larger tablet\computer that runs android? Looking for a multi-touch screen that just runs a web browser. Even better if it uses a VESA mounting… asking too much?

Glad I didn’t get the Telstra T-Touch then, these look pretty appetising, even without the mega specs on the smaller one. After setting up a T-Touch in store, I found it’s stylus is weaker than butter, screen’s alright but needs a bit of force. Just go capacitive.

another brand has the exact same device as this in another country.. err

and this doesnt support flash either.