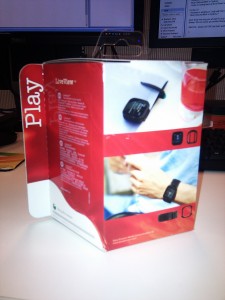 After Buzz and I met with James from Sony Ericsson last week, I got all excited about the LiveView. Basically it’s a tiny little device – about the size of a 50c coin (although it’s a good deal thicker – about as thick as four-five such coins) – that, via bluetooth, connects to your Android handset and provides  remote view of certain apps. This is achieved with a manager application installed on the phone, with the addition of optional plugins.

By default, the LiveView can show you remote notifications and expose services related to:

With the addition of plugins, the LiveView can achieve further things, like showing your Gmail inbox, displaying the weather, remotely making telephone calls, or changing the audio settings to ring, vibrate or silent. Some plugins work well. Some are garbage.

This all sounds pretty cool, and so we thought “lets review one!” and Alistair from MobiCity came to the party. Read on for more detail.

Sony Ericsson’s tag line for the LiveView reads as follows:

Take control of your phone without ever taking it out. With LiveView™ phone remote. It’s wearable and wireless. And you can customise it with applications. Discover your new best buddy – LiveView™.

This all sounds rather fantastic, so I had high expectations of this nifty little gadget. Unfortunately.. it didn’t quite live up to them. I paired the device with my Nexus One, which runs CyanogenMod 6.1. It may be that the issues I experienced are directly related to running this custom ROM, and so I will be doing some follow up testing by linking it to a Huawei IDEOS which runs stock Android 2.1.  If the same issues occur there, I know it’s more likely a problem with the LiveView than my phone.

Lets start with what worked well.

Notification for text messaging. It’s simple; it works. When you receive a text, the LiveView vibrates, and displays a notification light. Using the Liveview, you can ‘open’ the message, view it on your wrist, and (if you so desire) cause your phone to open the message ready for you to tap a reply. This only works, however, if your phone is unlocked. If its locked with the screen off, the feature doesn’t work.

Gmail notification. Same deal. If you receive a Gmail, you’re notified on the LiveView and you can preview the message on your wrist.

Remote dialer – this is cool. You can (using the 4 way directional input on the LiveView) flick around your contacts, find the right one, select the right number for that contact, and cause your phone to dial them. This is rather nifty, especially if your phone is connected to a headset or a loudspeaker – I can picture this being very useful in a car.

Now lets look at what didn’t…

Unfortunately, pretty much everything else didn’t work quite as expected.

Incoming calls variously caused the LiveView to drop its bluetooth connection to the phone, or worse, to just freeze up and die. The manual tells me that the LiveView should display the incoming caller ID, and give you the option to mute the incoming call. It didn’t do either of those things consistently. Sometimes it would work, sometimes it would freeze up, and on one occasion it locked up so tightly that it refused to work again for a good fifteen minutes or so.

After repeated testing, it seemed to become more stable, however the early crashes/freezing scared me a bit.

An obvious option curiously missing was the ability to remotely answer/hang up the call – something that would have been quite good in the car if you’re using a headset.

Calendar alerts didn’t seem to do anything much. Maybe I did something wrong.

A device like this needs to be seamless for it to be a killer feature. Unfortunately, it’s not quite there.

For example, it comes with a nifty little belt clip. However, removing said belt clip (following only the instructions in the manual) is rather difficult, and the two little plastic prongs holding the LiveView are easily broken (as I found out only too quickly). Frustrating to say the least.

The wrist-watch style attachment is very cool, and it looks pretty nifty as well. There’s just one problem.

You can’t charge the damn thing while it’s in the wrist-watch holder – you have to remove it. Not hard to do, but certainly a little bit annoying, and you have to be careful doing it, because yes, the two plastic clips on the belt-clip attachment which are easily broken feature on the wrist-watch attachment too. Remove the LiveView the wrong way, and you’ll snap them off too. It’s a little frustrating this wasn’t more carefully designed.

Aside from this the interaction with the device is rather simple. There are two physical buttons atop the device – a power and a ‘select’ button. The four sides of the front face are also touch sensitive, giving you four-way directional control to navigate the menus and interact with notifications. All in all, when it works, it works pretty well.

My initial impression of the LiveView was it’s bloody annoying. It sort of works. However, with more testing and fiddling while writing this review, I’m getting a bit happier with it. From here, I’m going to play with it as a daily device and see whether it’s useful, whether it works seamlessly as it should, and whether I’d recommend it as a good toy for Android users.

Stay tuned for the final word (which I’ll put in this post).

If you are looking to get one now, they’re available from the great guys over at MobiCity from $149

“However, removing said belt clip (following only the instructions in the manual) is rather difficult”
I’ve been googling how to do this.
Why do people insist on not explaining it!
It’s like the stupid people on forums who post
“how do I do x.”
“nevermind got it.”
YES BUT HOW?

Waste of money for HTC users…

would like to know if it has improved yet

Here is a tutorial on how to connect the Sony Ericsson LiveVIew micro display to your phone and also the re is one for sale http://www.sh-phones.com/?page…

I think most reliable testing would be with an Experia phone for which they were initially marketed for. Hopefully an all-Sony collection would prove much more stable.

If you target Android then you should test for more than just one make of phone. “All-Sony” is an evil idea, why not just “All-Apple”? If its not working well under non-Sony phones its just yet another pointer to Sony being pretty crap at dealing with Android.

Surprised no one noticed this but……
The Huawei Ideos comes with Android 2.2 not 2.1.
Just wanted to point it out 😉

O and regarding the charging problem when its mounted to a wristwatch strap: easiest* method is to just pull the LiveView out of its mounting clip, rather than removing one of the wrist straps.
*might not be so easy.

Have noticed, on occassion, massive lag in Android due to usage of LiveView. Had a feeling its service was hogging the system, last time the problem manifested I turned bluetooth off on phone and Android became usable again.

Agree with that observation about bluetooth Chris – I can’t wait to see what comes of wifi direct.

Heard It was very fiddly…wouldn’t expect fool proof operation like apple products.. The fact that it drops bluetooth connection says it all..

Unfortunately I find, and have always found, Bluetooth to be a crap technology. Never works consistently, no matter what the phone or the accessory. The LiveView is no exception.. however as noted in the review, after repeated testing, it became far far more reliable.

OMG I would absolutely f#*cking NEED one of these if it had media controls, even just a one-button pause/resume music playback feature.

You didn’t mention any media control at all so I can only assume it has none. That gets me all down in the mouth area.

I don’t _think_ it has any media controls.. but if it does, they certainly won’t be one touch – it’ll be through the plugins menu which makes it a few touches at least. I’ll check this tomorrow.

It certainly does have media controls. Long press on the right button and you get to them. Can start/pause the phone’s media player, previous/next track, and plus/minus volume.

look forward to the next review