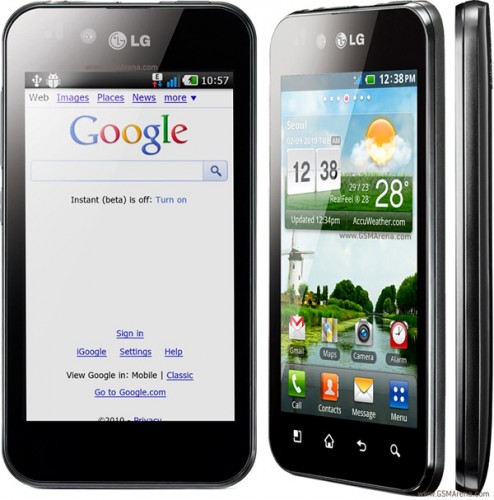 What you’re looking at above is the brother of the dual-core LG Optimus 2X that was recently announced at CES, the LG Optimus Black. What makes this device so special and great? you ask. Well, inquisitive reader, the Optimus Black has the brightest display on a mobile phone reaching a staggering 700nits to anyone who actually knows what that means, this is helped by LG’s NOVA display technology, move over AMOLED. It may only be a single core 1GHz CPU powering the Optimus Black, but our good friend Mr Gadget has assured both the Optimus Black and Optimus 2X are blazing devices.

Gizmodo is reporting that the Optimus Black is headed to Australia in May and LG are hoping to have it on more than one carrier with a monthly price of $49 to $79, we’re hoping for the former. Hit the break for some specs.

Now if only we could get the Tegra 2 powered Optimus 2X downunder as well!

Nice, that’s helpful for me!

Oh thanks, i appriciate that!

What sort of price u think we’ll be looking at for an outright purchase? I can’t get phones on contract…

Like all smartphones, it will be around the $800 mark (unlocked)

Hey Ragflan…a tad behind the times phone is exactly what LG needs. They have the optimus one covering the low end, this thing in the middle and the optimus 2X looking after the high end. Seems like a solid portfolio to me….

Good point. Not everyone wants the dual core handsets. Speaking of which, did you guys see the Optimus 2X demo? It’s got HDMI mirror. The guy was playing Need for Speed at 1080p on his TV. I cannot imagine how fun it’ll be to play Angry birds on a 40″ tv.

Move over Amoled? Move over LG Optimus Black. Thank you for releasing a device with the same specs as my year old Galaxy S albeit with a brighter screen. But anyway, welcome to 2010 Optimus Black. You’re a tad behind the times.

The Optimus Black really needs the 2x processor as BIG point of diff… sure thin but .1 is about .1 of value & screen how much to the eye against S-amoled wld need to be special … but do wish LG well as sounds like they are getting act together

re price points: would depend on which telco … $49 (everybody except telstra) $79 telstra … exactly how they priced the Nokia N8

The display and form factor is nice.. but would rather the 2x…
Even better yet, give me the Atrix…

Although it won’t bother me.. i’m going to buy my atrix online and get it sent down, I would like to see some pickup of these killer android devices.