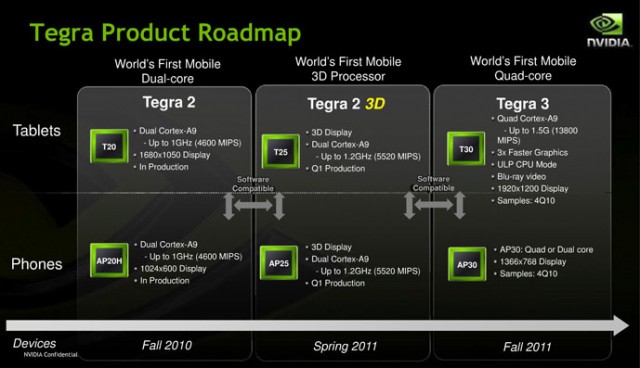 NVIDIA’s Tegra Roadmap for 2011 has leaked out and has excited everybody. With Tegra 2 the current powerhouse in the Android Tablet and Phone space, Tegra 2.5 and 3 look to blow it out of the water when they are launched later this year.

Tegra 2 3D (2.5) will bring the dual-core speed up to 1.2GHz with full support for 3D displays which we’ll be seeing come into the market later this year. Tegra 3 will bump to cores up to 4 and clockspeed up to a whopping 1.5GHz with 3x faster graphics, Blu-ray playback, ultra low-power mode (ULP) and support for screen resolutions upto 1920×1200. The phone version of Tegra 3 will also be bumped up to quad cores and support screens up to 1366×768. Tegra 3 will no doubt be the show stopper come CES 2012. We can’t wait.

Is this the same Nvidia that struggles to provide Linux drivers for its range of video cards, refusing to get free help from competent developers by releasing them as open source?

I’ll wait for version 3.1, thanks all the same.

yep, definitely overkill! I mean dual core phones only just got announced recently (e.g. LG Optimus X2), this is just a bit much! …..unless somehow a new type of mobile battery is being developed alongside these using a different tech to hold more battery life in a standard 1300mAH sized battery….. only THEN will I consider a a Tegra 3 powered phone!

this would be insane, they wouldnt develop a fone thats overkill, they would have to have a phone that can atleast go a day of medium to heavy use.

I wonder what size manufacturing process these will be using.
My main worry for a quad core in a mobile is (as stated earlier by other people) battery life, and heat output.

Wow, i’d rather have more battery life on a snapdragon than 4 Cores in a mobile, its just overkill.

But a single 1GHZ core is more powerful than 4 cores @250mhz.

Don’t mean to poo poo, but battery life on a quad core mobile device with that res screen may very well not last the day, so pointless for a mobile phone, but may be ok for netbooks or pads..