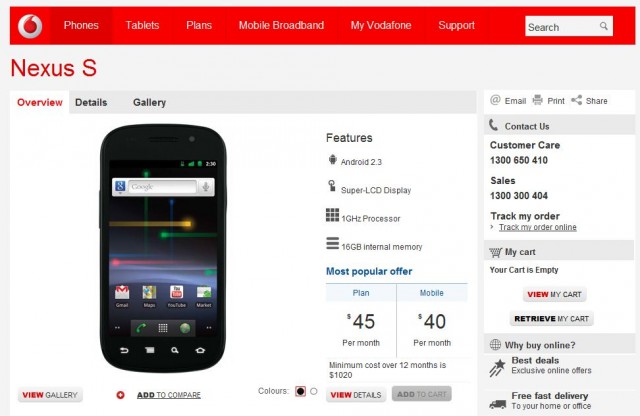 UPDATE: If this comment (purportedly from Vodafone) is to be believed, this pricing isn’t actually real, and it’s taken from a dummy page. Guess we’ll keep an eye and ear out and see what eventuates.

Vodafone’s online shop has been updated to include pricing details for the Android-powered Samsung Nexus S smartphone.

Running Gingerbread (aka Android 2.3), it will be available on the $45 Infinite plan, which includes nice things like 1GB of data, unlimited national voice and video calling, SMS and MMS messaging, and social networking sites. It’s a twelve month plan on offer, and the Nexus S itself is charged at $40 a month, making it $85 a month minimum spend, or $1020 per year.

Quite likely Vodafone will release the handset on other plans by the time of launch – you might expect to see plans with no extra handset costs and greater data inclusions (that’d be our hope, anyway).

I like 12 months also. No doubt they will be working on another model soon enough. Any heard what the battery life on this one is like?

Brian: how would they know if I root my phone and flash a custom rom on it? I did that to my nexus one and Optus didnt charge me for tethering even tho their plan states that it will.

Don’t forget that their data allowance doesn’t include tethering. They’ll slug you $250 per Gb if you want to do that.

Yea I hope to god that they offer a 12month plan. I just signed up today a bYO sim( was thinking of getting the galaxy S on 24month) but might wait. POrted from optus to Voda. Bring it on VODAAA before some BS phone comes out WMC.

I’d like to see someone try to send a few hundred million texts… I hope the ACCC sinks the boot over the foolish use of the term “infinite”.

Hi everyone,
The pricing that was quoted in the story for the Nexus S has been taken from a dummy page and is not reflective of actual launch pricing. We plan to be able to share the launch pricing with you soon.

Dylan
Reply to  AT from Vodafone

Lucas Burnett
Reply to  AT from Vodafone

If it’s not they wont sell any.

plus the amaysim prices are CRAZY!!!

But is the service on amaysim any good??? That’s a major reason why people don’t want to go to vodafone, more so than the price.

I’m probably out on my own here, but I like the idea of 2 year contracts. I got my SGS in August last year, and while the phones coming out this year are cool and drool-worthy, in 2012 when my contract is up, there’ll be even better phones on the market! I like upgrade my technology in big jumps, not just small, incremental ones so I can see just how much tech has advanced from a few years ago. Just like when I buy computers, I buy them about 4 years apart (a lifetime in computer terms) and I love… Read more »

I’m with you on this one.
A product doesn’t suddenly become crap because it’s more than 12 months old.
And given how incremental some of the so-called ‘improvements’ are, it allows sufficient time for significant progress.
I really liked the Desire on release but refused to buy something with such a poor power source. By the time I buy a smartphone (still on dumbphone now) it will work in the manner I WANT it to work.

If its released on their old caps, the Galaxy S is 49+5

I would expect these to be minimum prices for Nexus S, as the Galaxy S is a much older (and now cheaper from Samsung) device.

SuperLCD is a let down though. I’m really excited for this Sunday. Galaxy S2 will be announced. Can’t wait to see what Samsung has in store. Doubt many people will opt for Nexus S instead of Galaxy S2 especially if they are being released at the same time in Australia (provided they’re on the same plan).

I don’t think you can get a good enough plan that offers all those calls/smses plus 1gb of data for ~$27 a month. This plan is quite good especially when Android phones are being upgraded so quickly that after 12 months, your phone starts looking really old.

That would be cheaper to buy out right…

do you think it is a phone worthy of buying if it has the super lcd and not the super amoled,

totally agree with the 12 month plan. saves having to buy a phone outright when you get sick of yours after 9 months.

Any pricing on outright purchase?

I’d also love to have Gingerbread on my Desire HD….got less than 12 mths left on DHD contract.

Mobicity have it for sale now for $779 unlocked. Vodafone probably won’t sell it outright because they know that noone would stay on their network at the moment unless they were tied into a contract.

I reckon that you would have to buy it online. It would be cheaper to do that too and you get the nice screen.

I like the idea of a 12 month plan. In 12 months time, there will be another drool-worthy phone that I’ll want and I could always flog this on eBay.

Have to agree Paul, 12 month contracts are infinitely better than 2 year lock-ins. Given the pace at which Android is moving along, being tied to a 2 year plan is too much.. even 1 year could be a bit much these days!