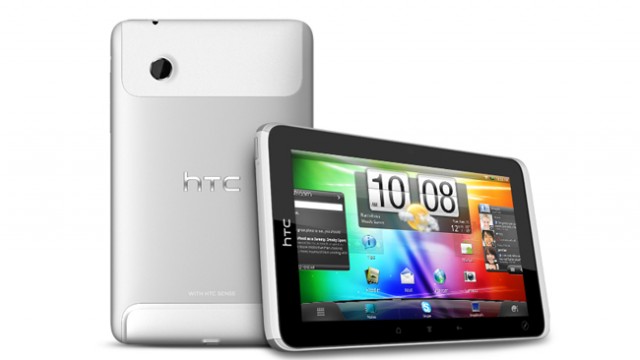 We are not interested in rushing out another me-too device.
We took time to understand how people use the tablet and we thought hard about what hardware is needed to drive a special experience.

The Flyer features two cameras, weighs only 415 grams, has a six hour battery life, and a 1.5GHz processor. At 7 inches, the screen boasts a resolution of 1024 x 600 pixels. The Flyer is another 7″ tablet (rather than closer to 10″ like the iPad), which HTC claim enables mobile use, because it can be more easily held (and used) with one hand.

Internal storage is 32GB and there’s a Micro SD slot. 3G and WiFi only versions will be available, the tablets also support Bluetooth 3.0 and N WiFi. There’s a 5-megapixel main camera and front-facing 1.3-megapixel camera.

Accessories include a pouch with in-built stand, desktop dock and Bluetooth keyboard. HTC wouldn’t be drawn on prices, but said because of its premium built it will be towards the higher end of the tablet market.

Somewhat confusing though is the decision to include a stylus, however as a device with a focus on data entry, there are limits as to how far a finger can go. The stylus is more than a piece of plastic, though – it can be used to sign on-screen documents, send messages, or capture audio to accompany written notes.

Software-wise, the Flyer will run Android 2.4, with a likely update to Honeycomb not far off (presumably once HTC figure out how to make HTC Sense work on it). The Flyer is due out in Q2 2011, though whether we’ll see it in Australia in that timeframe, or whether it will feature some of the announced US-centric features – such as streaming movies and games services – remain to be seen.

“We are not interested in rushing out an other me-too device”.

Er… Where does that leave their ENTIRE mobile phone range from MWC?

Why, oh why did they not use stock Honeycomb and put their piece of shot Sense UI on it! Sigh.

Would have been a good device without it.

The pen is powered and the screen has a digitizer built in, so things like pressure can be used in apps. Get some handwriting recognition into that notepad app (in the way the newton did it, not the graffitti/palm style), and this tablet will be a winner amongst execs and students. At least its not *another* Android tablet or iPad rip off 🙂 I’ll be buying one as soon as I can get my hands on one!!

I’m still not quite sold on the idea of tablets just yet but this device might change my mind on the basis that HTC makes good products (although their latest phones is a little underwhelming).