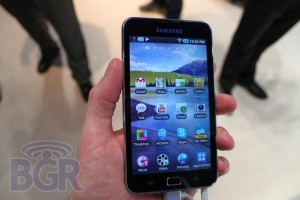 So it seems that the news coming out of the Mobile World Congress continues, with Samsung announcing some devices that – wait for it – aren’t technically mobiles.

Boy Genius Report has the scoop, but the nuts and bolts are these – Samsung has put out some devices called ‘Galaxy S’ but which are WiFi-only.

The smaller of the two – the Galaxy S 4.0 – has a 4″ LCD TFT display, 1GHz Hummingbird CPU, front and rear cameras, bluetooth and WiFi, a 1200mAh battery, and expandable micro-SD card slot. It runs Android 2.2 (FroYo) and, like other Samsung Androids, it has TouchWiz also.

It’s pretty clear from these specs that Samsung is taking clear aim at the iPod touch as a smaller, and popular, tablet-alternative.

YES, i’ve been waiting for an android replacement for my …*shudder* Apple ipod touch..