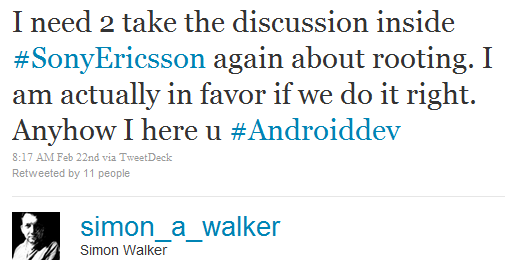 A week or so ago, Simon Walker, who is head of Developer Program at Sony Ericsson, tweeted that he would like to take the conversation regarding “rooting”, inside Sony Ericsson and would be in favour of it, if it was done right.

With Motorola using an unlockable/relockable bootloader on the Xoom, could Sony Ericsson head down this road in the not to distant future? It definitely seems like the right thing to do. Sony Ericsson could be on the come back trail, Xperia Play, Arc, Neo, all very good handsets, add in an unlocked bootloader and I’m all ears, are you? Hit up the comments and let us know

Hey Lucas have you seen the vids of the new phones running from MWC, i would say they are still pretty laggy.

at this stage to me, their hardware is a bit behind the others but an unlocked bootloader would be a massive step in the direction of getting back some loyal users. When people think of android (or phones even) sony Ericsson is not a name that springs to mind immediately….

When I think of android and SE at once I get the urge to both run for the hills and slash my wrists at the same time.

We don’t condone slashing of wrists, but I tend to run for the hills every time the X10 is mentioned.

I hope so Buzz