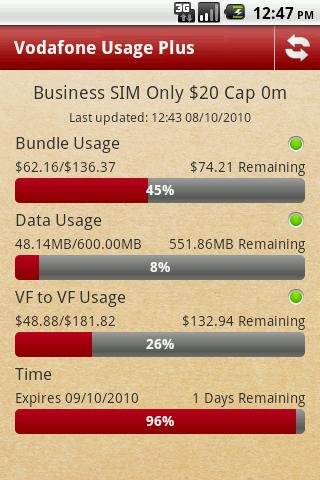 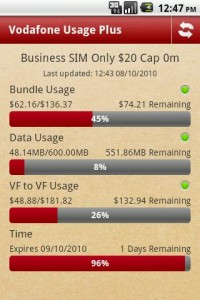 As anyone with a smartphone of any kind will tell you, data is king. Android phones are no different, and depending on your usage pattern, there’s a good chance you’re going to be using a good amount of data, and while mobile plans these days include more and more data, it’s not unlimited, and you need to stay on top of your usage unless paying excess data usage costs is not much of an issue for you.

Today, we’re looking at an app which checks your included data and plan usage on the Vodafone network. These two apps (a ‘lite’ and ‘plus’ version are available) make this a simple task. Whether you’re on a post-paid call and data plan, or a mobile data plan only, you can track your usage either within the app itself, or via a number of configurable desktop widgets.

Between the standard and plus versions, over 10,000 installs have been recorded on the market, suggesting this app is doing the right thing for a lot of Vodafone users in Australia. As the graphic to the right shows, your usage is shown graphically as well as descriptively. You can easily see how much data is remaining, and equally important is your call usage which is also shown. 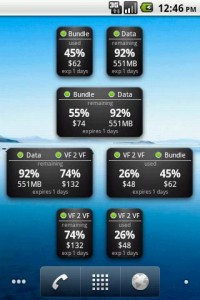 A variety of desktop widgets are also available which you can use to quickly see your usage at a glance from the home screen.

Some of the features in the pro version, which we at Ausdroid recommend, are:

One of the biggest bonuses, in my opinion, is that it supports Australian Android development, which Ausdroid thinks is a great thing.

The only detractor – for now – is that neither the lite or plus versions support prepaid plans, but this will hopefully be coming in future versions.

As with all our app reviews, this app was reviewed on a HTC Desire HD supplied by MobiCity. You can get your own here. Note that in this case, as we are not Vodafone users, we couldn’t test all the functionality of the app, so the screenshots shown are from the Market.

I am not impressed as it just polls your Vodafone account rather than actually track the usage. The Vodafone provided details are sometimes more than 2 days old and this app will give you a false sense of security. Imagine going over your data limit and only being informed about it after 2 more days of usage. Users should Not rely on the alerts stopping them in time. A good review should have stated the above. I find the blank SMS to 1512 as effective but do accept some people would like the info in a Widget for ease of… Read more »

We have a prepaid Vodafone SIM, but unfortunately we’re not in a position to sign up to a contract to test out network specific apps like this 🙂 Appreciate that we can’t really test much without a Vodafone account to test with, but we did what we could. I did fire the app up on the Desire HD, and it worked as advertised – I plugged in my friends Vodafone account details briefly so I could verify it would load details from a postpaid account – and it worked, but I didn’t want to post screenshots from it.

without having used the app (“as we are not Vodafone users, we couldn’t test all the functionality of the app”), can you really say you’ve “reviewed” it?

the main issue i have with a similar app is it’s occassional lag in updating, if this experiences the same thing, we wouldn’t really know…

that being said, i am a fan of the site and it’s articles so keep up the good work!

In addition to my comment above, we have also made no secret that we want to promote and showcase Aussie-bred apps.

Love the aussie-centric reviews. Keep it up!

I use Vodafone Usage Plus, and find it fantastic.. The main issue that occurs during use is that the Voda website isn’t accessible – and most people with Voda will be aware of how flaky the My Vodafone website is.
In my opinion, a must have for Vodafone users..

I’ve met the developer. He’s a great guy. If you’re with Vodafone and this app would be useful to you then definitely consider buying the full version!

I’m a Vodafone Post-Paid customer and have purchased the app, but stopped using it due to Vodafone’s system. I have re-installed it as I forgot about it. Looking forward to getting some use out of it.