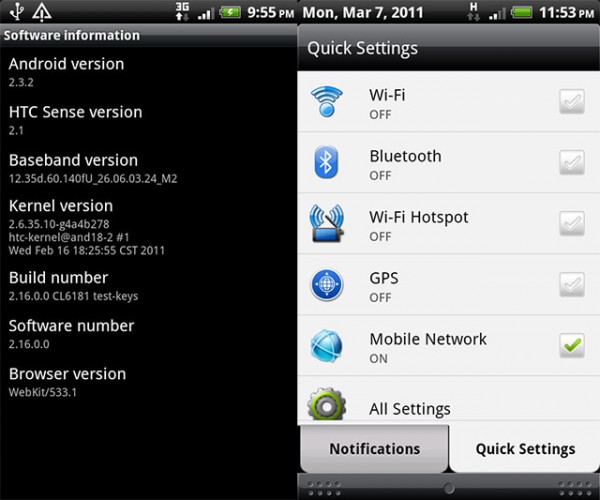 HTC have become known to drop a leaked ROM to XDA Devs every now and then, this time it’s the HTC Desire HD that’s benefiting. A leaked Android 2.3.2 build with Sense UI has surfaced over at the notorious HTC hacking forums, that we’ve come to know and love. The build has already been torn to shreds by developers and is ready to be flashed onto your rooted Desire HD. If you’re up for that, hit the source link at the bottom of the post, you know you want to.

As for the ROM itself, there a few UI changes such as the notifications drawer which now lets you get to notifications and the most used settings in an instant. Users are reporting that it’s fairly speedy and stable, but it’s not a finished product. You’ll be waiting around until June for the official update to hit your Desire HD.

With Cyanogen already on 2.3.3 I don’t think ill ever go back to a HTC Sense UI 🙂

ah, good to see that my phone will soon get its “official” update 🙂

Just have to wait another 3 months or so 🙁

I know you just lurk in those forums Buzz, don’t worry I do too, I saw it this morning but hesitated and then I forgot about it until this post!

If I want to get a phone and it's not listed on there, I won't buy it.