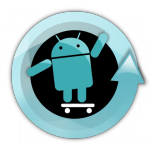 Cyanogenmod is one of my favourite custom Android ROMs, and not long ago, it’s latest iteration – Version 7 – hit release candidate 2. We brought you the news when the first release candidate aired a few weeks ago, and now with RC2, we’re seeing a feature-complete Android ROM that will soon become the final CM7 release.

The main new feature is WiMAX 4G support (which isn’t of much benefit to us folk in Australia), but it also represents the roll-out of all the Cyanogenmod-specific features that you’ve come to know and love.

Reports have it that RC2 is copping a pounding – over 150,000 downloads since the announcement – so you may find downloading it a little slow, but be persistent and soon you will have CM7 on your supported device.

Grab your copy over here: http://mirror.teamdouche.net/?type=RC

For those who don’t recall, these are the supported devices:

I tried this ROM, but have switched to the leaked HTC Gingerbread ROM…I find it a lot more user friendly and you get to keep HTC Music which is awesome (Dolby Mobile!!).

Nope. RC2 is the latest. They’re in feature-freeze now, just ironing out bugs. Doubt we’ll see an RC3 on CM7.0 .. though I suspect work on 7.1 will not be far behind 🙂

The upgrade from RC1 to RC2 seems to have injected some problems.
For instance, I can’t snooze alarms or shut them off.
I didn’t have time to play with it this morning, but I ended up rebooting my phone to make the alarm stop.
And within the clock app, the option to “Hide dialog” is greyed out.
I’m tempted to roll back to RC1 which seemed to work almost perfectly.

Which handset are you using? Ive got a Desire HD and have upgraded from RC1 to RC2 and i haven’t come across that issue yet

Can anyone confirm upgrading from RC1 to RC2 erases all settings and install applications? If so, what do you use to retain all of this?

It doesn’t appear to delete anything, if you upgrade using clockwork mod 3+ it doesn’t modify anything in the cache so everything is maintained across the upgrade, sms’s, wallpaper, settings EVERYTHING.

Desire HD, originally from Vodafone before I rooted it (not that I think that makes any difference).
Perhaps I would be better served with a clean install?

Samsung Galaxy S is particularly missing from this list.

CM7 for Galaxy S is still in the experimental stage, not even RC1. (http://goo.gl/hGVBd)