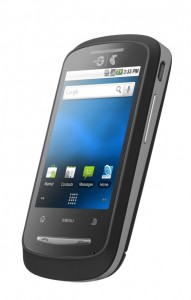 Update: After a bit of digging, it seems the Smart Touch (aka Grape) is a ZTE Racer/X850, just re-badged for Telstra. Another small piece of info that makes the IDEOS a much better buy is larger MicroSD compatibility, up to 32GB is the limit, whereas the Grape is only 8GB.

Telstra have a funny relationship with Android – they have released some cool phones and done well out of them (the Desire and Galaxy S are some that spring to mind), but have not released some obvious choices which would put them ahead (Desire HD, anyone?).

Telstra are in a place now where most of their flagship phones are Android powered, and they’ve even released their own branded Android tablet device (the T-Touch Tab). They’ve also had a smattering of Androids across their prepaid range (remember the Wildfire, anyone?).

Now, they’ve added another one, and we find ourselves asking “why?”

Telstra’s branded $99 prepaid (shown to the right), dubbed the “Smart Touch” is anything but – with a resistive touch screen, it’s hard to see how the words smart and touch can be used together to describe the phone, but let’s put that aside.

It features Android 2.1, has standard things like GPS and WiFi, and has a 3.2 megapixel camera. Not the best, but not the worst. The screen – at 2.8″ – is resistive, meaning it requires (a) more push to get it to register, and (b) probably isn’t as accurate as a capacitive touch screen. On the plus side, you can use it with gloves on, or (shudder) use a stylus if you feel the need – a meaty appendage isn’t required to operate the phone.

For $99, we think the Huawei IDEOS is better value. It has Android 2.2, it’s got a capacitive screen and doesn’t come pre-installed with Telstra’s signature bloat-ware, which (as the press kit shows) is pre-loaded on the Smart Touch.

Telstra have also released new prepaid pricing to coincide with the release of this phone. Hit up Telstra’s news page here for all the new offers.

brought a smart touch today and the touch pannel won,t work any one else had this problem please let me know.

Copied from a post by a Telstra (I think) squawking head on the Whirlpool forums:
http://forums.whirlpool.net.au/forum-replies.cfm?t=1659344#r13

The Telstra version will have 32GB expansion capability and 850 HSDPA.
It wll NOT do GPRS
so there isn’t much point in comparing it with a UK ZTE X850

It upsets me to see the power and experience of Android cheapened by crappy handsets.

Why do I have the distinct impression that you didn’t expect any positive responses to what is being released by Telstra?

Telstra have released some great hardware.

This isn’t an example of it.

Is the IDEOS offered on Telstra? People on Telstra normally are for the coverage.

Meaty appendage probably isn’t the best use of words to describe something. Funny though.

Considering my internet browser freezes everytime I click a Telstra link, I don’t think this phone has too much to offer. Thank you Optus for your great deals!

Obviously you don’t know anyone with long finger nails, my flatmate just can’t use my htc desire.
A resistive screen phone sound like the go for her.
Does anyone make phones that are both capacitive and resistive?

Telstra were offering the same thing, but in a dumbphone version (The Telstra branded-ZTE BubbleTouch), at $99 also. For the same price, but in an Android version, I think its a great deal.
Still agree its a shame about resistive and 2.1 version though.

A taste of the future: Oh wise and powerful Telstra Boffins. We poor imbeciles have purchased said ‘smart’phone and after installing a small amount of apps, woe to us, we find the memory is full and can’t accomodate all the other apps we’ve been eyeing off in the Android Market.

You know what comes next don’t you?

Telstra do also offer the HTC Wildfire prepaid for $299 (from memory) … for the price tag I think you get a pretty good deal.

IDEOS kicks the wildfire’s ass. even voda has the legend for 350, which is much better for price/perfomance than the wildfire, too.

This is the type of vehicle, and type of price, that will lure traditional dumb-phone budget-conscious users to a smartphone platform. I’ve seen this happening already. There’s still plenty of dumb-phone users who can’t afford big ticket Android/iOS devices but still want a good feature set.

Vodafone locked in an exclusive global distribution agreement for the DesireHD with HTC that locked Telstra out of the running even if they wanted to sell the device.

That said TBH i’d rather have the Desire, the HD isn’t a big improvement and the Desire has a better hacking community behind it.