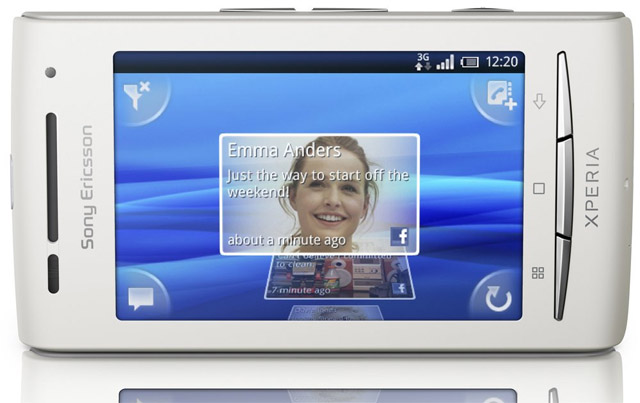 Update: Crazy John’s have told me, that they have had the X8 available for $169 for a few weeks now, so hit them up and grab one, if you wish.

It’s old, it’s late but it’s cheap. Vodafone are due to launch the Sony Ericsson Xperia X8 on their network on both pre- and post-paid. Starting at $0 upfront on the $19 Cap and $45 Infinite plans, and only $169 on pre-paid, the little 3.2 megapixel, 3″ touch screen handset, is certainly priced by it’s age.

Optus picked up the handset almost 6 months ago, now Vodafone are following the call. Let’s hope it launches with 2.1 instead of 1.6. It launches March 23rd, and should be picked up by most Vodafone dealers.

I’ve got one on my desk. Anyone getting this needs to add ADW immediately. It baffles me that SE kept the “corners” homescreen on a 320×480 res screen.

The OS is just FINE despite being 1.6 (stop for a minute and think about the target market – not everything has to be cutting edge)… the only real let down is the screen quality (brightness) aint that great.

You’re a little out of touch with the average phone user dude. And with retailers. The majority of Android users are not like you and me. They don’t know what an OS FLASH update is or in most cases even care why we might think it’s important. Now, there is a lot of enthusiasm in Android users and I’m not saying the “majority” is as high as 90% or anything… but think for a minute about the demographic that is going to buy a little SE X8 on $169 prepaid. That phone already does everything they need it too, and… Read more »

Lucas, let’s hope it vodafails utterly to sell.
It’s too old and and primitive and crippled now. It was released to market using a woefully out of date version of Android for the time, and can’t even be bought up to current by the majority of the users it’s being priced at.

“It’s too old and and primitive and crippled now”

Too old: was released globaly September 2010.
Too primitive: Android 1.6, when 2.2 was available, and folks were hanging out for 2.3.
Too crippled: Sony’s 4th rate excuse for an Android launcher, taken from the X10 and inflicted on the X8.

I will disagree with the launcher argument, I actually really like Sony’s Corner launcher, it’s extremely effective for small screens and works very well, The X10 mini and X10 mini pro were awesome phones and had great usability mainly due to the launcher. However they shouldn’t have used it on the X8.

Lucas, I agree that the corners launcher works extremely well on the X10MP etc, but this handset has a 320×480 res. That’s the same as the G1, Magic and Legend. The phone is TRANSFORMED into something usable when applying a home replacement like ADW, which really shows that the corners UI on this screen res was a poor decision.

Looks like a pimped up version of my old W595.