Ausdroid’s Aussie App Review has been on hiatus for a little while, but now we have a Samsung Galaxy S 2 in the Ausdroid head office, it’s time to get back into them when we have time. The first app we decided to have a look at was JAGEN, a game from The Grey Studios.

I’ll be the first to admit, I’m not much of a gamer, but I found this game a bit of fun. It’s described on the Market as:

JAGEN is a new and exciting arcade game where you control a drone through 25 challenging levels full of surprises. Force fields, Jump Pads, Laser Barriers and much more will make it a real challenge to beat! If you love games like “Marble Madness” or “Super Monkey Ball” you will love JAGEN!

Included in this game is the first episode “Planet Ecko”. More episodes with exciting new features will follow soon, and new levels will be added frequently! 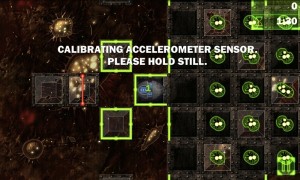 I’ve been playing JAGEN on and off for the last couple of days, and it really shows up my lack of gaming ability – quite frankly, I suck at it! The concept is simple enough – move your spaceship around using the accelerometer in your Android device, collect the various items, avoid the edges (though green edges are okay; you bounce off those) otherwise you’ll fall into the abyss.

Initially the calibration of the accelerometer at the start of each level attempt was a bit annoying, however the rationale for this quickly became clear – you’re not always going to be holding your device perfectly horizontal, and this allows for easy play on the train or when standing etc. Quite a nifty feature.

The gameplay itself is fairly simple and easy, though for a non-gaming type like me, I struggled to get past the fourth level – though it’s probably a lack of time on my behalf rather than a lack of ability – I don’t get much time to play games! All in all, JAGEN is a fun little game, and the price – free – is a great selling point.

Check it out now on the Android Market, and there’s a few game screenshots below: