I was excited to review the HTC Incredible S, not just because this is my first ‘official’ review, but because it’s been a long time since I’ve had an HTC phone and I was curious to see how they had changed. The HTC Incredible S is not a flagship phone and doesn’t have the specs to challenge the likes of the SGS II, Atrix or Sensation and for this reason the ‘Incredible’ moniker perhaps overstates its greatness (although it has a better ring than the HTC Pretty Good) however I found it to be a solid mid-level performer, read more to see why. Upon opening the box the first thing that struck me was its clean face, there are no visible soft buttons when the phone is off to spoil the smooth look of the front. It may not win any fashions awards but at least it looks different enough that it won’t be confused with that other mainstream phone.

The Incredible S has a good weight, it’s even a little lighter than I expected. When the phone is switched off the 4 soft buttons at the bottom are not visible, when they are the order is Home, Menu, Back, Search. When the screen is rotated into landscape the soft buttons also rotate, a nice touch. At the top right corner is the 1.3MP front camera, in the middle of the bezel is an HTC logo, and at the top is the earpiece. The notification LED is incorporated into the right hand side of the earpiece. Power button is at the top right and 3.5mm headphone jack at the top left, the micoUSB input is at the left bottom side of the phone.

The rear of the phone sports a rubbery finish which grips really well in the hand and is not at all slippery like previous HTC devices. At the top left is the 8MP camera and dual LED flash and speaker which is suitably loud.

The 4” 480×800 S-LCD is bright and responsive, colours are accurate without being over-saturated. The display is gorilla glass so it will take a bit to leave a lasting scratch. It’s nothing spectacular in comparison to 4.3”, qHD, or Super AMOLED screens of other phones but it is quite capable and I had no major concerns with it.

Under the hood the Incredible S has a Qualcomm MSM8255 Snapdragon with an Adreno 205 GPU, identical to the Desire HD and the Xperia Arc. 768mb of ram is pretty decent, although you wouldn’t want any less while running Sense, and the 1450mAh battery is a welcome upgrade from the Desire HD. I found battery life to be pretty reasonable and had no problem getting a full work day of medium use on a single charge. There is 1.1GB onboard storage for apps and system files, if you want to load media then you’ll need a microSD card, luckily a 16GB is included.

The Incredible S has an 8MP camera with dual LED flash and records in 720p at 30fps. I really don’t use my camera very often at all so I can’t comment on the comparative quality of the photo or video. Below are some examples so you can decide for yourself. 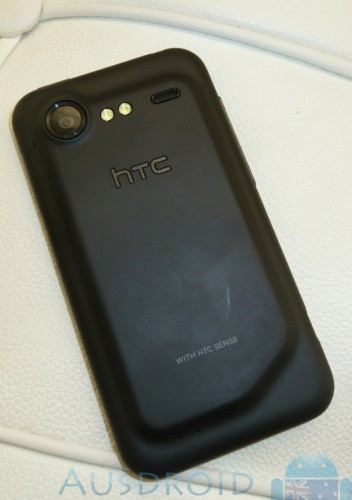 On first boot the setup was straightforward with the added option to transfer settings and messages from a previous phone via bluetooth, a nice touch which will help some people with the transition from an older phone or one from a different platform.

The Incredible S runs Sense 2.1 on top of Android 2.3.3 which is the latest major version of Android. Sense 2.1 is not the most recent release of HTC Sense however, and HTC have confirmed that single-core devices such as the Incredible S will not see a full version of Sense 3.0, only some aspects. From what I have seen this isn’t necessarily a bad thing, as Sense 3.0 seems to add a lot of 3D eye-candy and not all that much in terms of functionality.

HTC Sense has come a long way since I last used it on a HTC Hero, it’s not just a launcher anymore but it includes multiple apps and even modifications to the notification blind. Some of the notable HTC Sense apps are Friend Stream, Locations and Reader but they didn’t appeal to me all that much since I have always used alternatives from the Market which tend to be better and see more frequent updates. For example the Locations app offers voice guided navigation, free for 30 days or $80 for unlimited access thereafter, which may be useful for overseas navigation when you need locally stored maps, but Google Navigation does the job just as well without the cost. The notification blind allows tabbed access to Quick Settings and Open Applications which I found quite handy; unfortunately it doesn’t allow you to kill the apps if required. The app drawer allows you to see all apps, frequent apps, or only downloaded apps.

Personalisation and customisation under Sense is quick and easy. HTC must see this as another main feature of the software because it has a dedicated shortcut on the stock launcher dock. Very easy to change skins and scenes which change the entire look of the phone.

An annoying aspect of Sense is the multiple logins required. Most users will download the Facebook app and be confused by the need to sign into both Facebook and ‘Facebook for HTC Sense’. To use some apps HTC Sense itself requires a login. When adding my Facebook account I was presented with the option to link contacts Gmail and Facebook contacts. While this is a nice touch, it required confirmation for every single match rather than just the exceptions, and when you have a few hundred contacts the only option is really to select all which defeats the purpose.

To summarise Sense – If you are a new user you will appreciate the ease with which Sense allows you to personalise your device and the consistent look and feel of the Sense apps. If you are not a new user you will probably immediately install your preferred launcher replacement and won’t use Sense anyway. Personally I don’t really like Sense as I feel it is unnecessary and slows down the device. The HTC Incredible S currently has a locked bootloader which does restrict the amount of modification that can take place, however HTC have committed to unlocking the bootloader so hopefully we will see some action on that promise soon. Custom roms are available and it is rumoured that 2 CyanogenMod developers have picked up the Incredible S and it is being officially supported in the future. Until HTC officially unlock the bootloader the only way to get root and flash a custom rom is to get s-off is either via an XTC clip which is not always readily available or cheap, or the AlphaRev X software unlock. As the AlphaRev X unlock has only just hit public beta and is largely unproven, we’ll have to wait and see how effective it is.

Benchmarks for the Incredible S are around where I expected them to be considering the hardware specs – Quadrant score is 1265 which is just under the Nexus One running 2.2+, Neocore is 56.5fps which are both pretty reasonable scores and reflective of the performance I experienced with the phone.

The HTC Incredible S looks good, feels good and performs well. It’s not a ground breaking device but it doesn’t pretend to be and it’s not priced like one either. The locked bootloader and mediocre specs mean this phone is not going to attract the android enthusiasts, however with the solid build quality, Sense UI, multimedia focus and user-friendly setup process it is well suited to the android beginner.

great review McBooth… it really seems like a winner if you don’t want to carry around a tablet in your pocket … my navman is 4.3” lol

Thanks for the review have re-tweeted. Phone looks good and have had lots of friends asking about it. Reading through the comments below obviously not everyone’s cup of tea.

A single day’s use on a charge… FAIL.

not really, its better than most medium to high end android phones.

It may be but that still doesn’t make it acceptable. My current phone will last for four or five days between charges; okay, it is not a ‘smartphone’ but I certainly won’t be replacing it till manufacturers decide to stop cheating their customers.

This current generation of devices should be called, ‘only just mobiles’…

Great review IMO however not the phone for me. Keep them coming!

bought this at launch and really love it so far. Only a couple of hardware negatives… usb on side is annoying and lack of camera button. Spftware wise i would like to be able to turn off birthday reminders in the calender widget.

You’ve gone into calendar – settings – set alerts and notifications – set to off?
Lack of camera button is annoying for regular camera users, but there are not many android phones around that have it (none that i have used). USB on the side is perhaps becoming something of a standard with Moto also placing it there on the Atrix. Inconsistent placement of ports makes accessories a real hassle to find for android

Hi matt thanks for the reply, i want to see events from facebook just not birthdays, i don’t know how to separate the two! I think google needs to put a usb port location rule, so we can start seeing lots of awesome accessories like the icrap gets, especially with the new software coming out soon.

Did you run the quadrant again for the average score? My Virgin Mobile Incredible S most of the time around 1450+. Only once did it go down to 1250+.

I ran it 3 times and used the highest score, I didnt want to run it after a fresh reboot as I wanted the score to reflect performance under normal use. Quadrant isn’t always a true reflection of performance anyway, I found it ran smoother than some phones with higher quadrant scores

Huh.. After seeing this I kept the browser running in the background and ran the test an gotten 1426. The phone’s been up for 75hrs now. Is the phone you reviewed the stock one or with Optus? Good job on the review by the way!

Thanks 🙂 Stock Optus. I ran it again just then and pulled 1604 so it does seem pretty temperamental. Didn’t really have any problems with lag either considering its a single core phone (in the dawning age of dual cores)

It’s been about a month i got this phone and find it amazing. Games run great, screen is top notch, IMO. Rooting is easy and with custom ROM, it is blazing fast and battery lasts 2 days with normal use. Pretty good phone despite having a single core processor.

Bought one of these for the other half on the weekend. I think it is a great phone at a really good price. Shame I am stuck on a Legend with Vodafone. 🙁

how is locked bootloader a con?

Rev X does bust it open, but HTC made the decision to lock it in the first place which is a negative compared to other phones. From what i’ve read Rev X is a relatively straightforward process, unfortunately I couldnt test it on the review phone