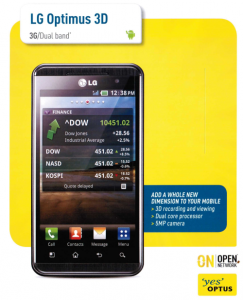 Well, after the leaked display card, we knew it wasn’t going to be far away and we were right. Officially announced today, LG‘s newest addition to the Optimus line up, the Optimus 3D, will hit Optus stores and dealers starting from early next month.

It will be launching at $0 upfront on the $59 Cap over 24 months. That’s not bad pricing for the first 3D handset to hit Australia, what is bad however, is the outright price of $799, that brings it into line with the Samsung Galaxy S II, and it’s hard at this stage to compete with the Galaxy S II at its current outright price.

You either need to come in around the $600-$700 mark or be very competive on post-paid pricing; the later is where the 3D should do well.

The handset itself is quite a power house. It runs a dual core processor, along with dual channel memory, packs a 4.3″ glasses-less 3D screen, dual 5MP cameras capable of recording 1080p at 24fps in 2D and 720p at 30fps in 3D, HDMI 1.4 and will also ship with 10 free 3D games from our good friends at Gameloft.

One disappointing fact is the version of Android the Optimus 3D will ship with – it’s due to ship with Android 2.2 (FroYo) but LG have told us it will be upgraded to Android 2..3 (Gingerbread) in the near future. How far away is the near future? Hopefully closer than the Xperia X10 and it’s Gingerbread update.

Yay – for once Australian’s get a phone in line with a global release!

finally an omap4 phone in aus!!