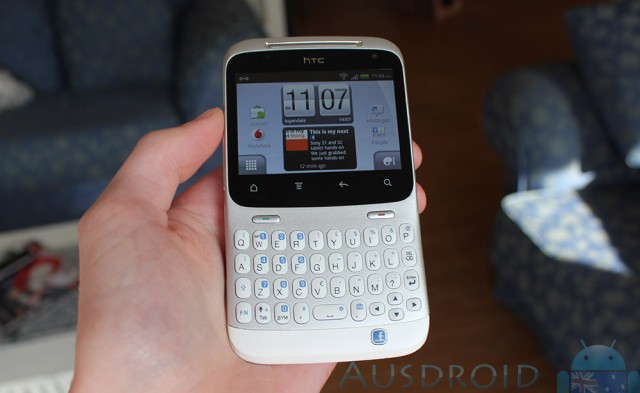 The rumour of HTC manufacturing phones for Facebook may have been false, though the idea of the creating Facebook phones was on HTC’s mind. That’s where the HTC ChaCha and HTC Salsa come in. Both of which are closer to the low-end of the smartphone market, but are targeted straight at the Facebook addicts of sorts. What you’re reading now is the review for the HTC ChaCha, if you want to read about the HTC Salsa check out Matt’s review. Hit the break to read more about the HTC ChaCha

Although the HTC ChaCha won’t set your heart aflutter with its hardware specs doesn’t mean they’re not that good. Under the hood is an 800MHz CPU that was overclocked from 600MHz as production of the device ramped up; a 5MP camera — VGA front facing — with a single LED flash that can shoot video up to 480p, so if you’re after 720p look elsewhere; the screen is 2.6-inches with a HVGA (480×320) resolution which is landscape compared to the traditional portrait setup; there’s 512MB RAM; Wi-Fi b/g/n and Bluetooth 3.0; and of course HSPA on bands 850/2100MHz which is a new move by Vodafone. The ChaCha feels surprisingly good in your hand, likely because of the subtle chin the device has (think HTC Hero or Legend). It’s also a little bit heavy — weighing in at 124grams — considering its smaller size in comparison to the likes of the Optimus Black (109grams) and Galaxy S II (106grams), but that’s a testament to HTC’s solid construction.

On the top of the device is the power/unlock button and 3.5mm jack, the rear houses a mic and on the left you’ll find the volume rocker and micro-USB connector. The front of the ChaCha is where you’ll find its notification LED, VGA camera, 2.6-inch display, 4 capacitive buttons (L-R: Home, Menu, Back, Search), and the 40-key keyboard, call & end keys as well as the now infamous Facebook button.

The display on the ChaCha is different to a majority of displays on current Android devices as it’s in landscape orientation instead of portrait. This has both pros and cons, for example: you can watch YouTube videos in 16:9 without having to flip the device on its side like you do with most devices now, the con being that some applications make you flip your phone on its side so that you can use it in portrait orientation. That’s the only gripe we had with the display.

With a HVGA resolution — that’s 480×320 pixels — we had no issues with pixel density, which measures in at 221ppi. To give you an idea, the Galaxy S II has a pixel density of 216ppi. So images and text are very crisp on the ChaCha’s display. Since the ChaCha is very much a social networking device the Cameras don’t have to be all that good, as most images are scaled down to about 1000 pixels wide on sites like Facebook & Twitpic, which is more than half the normal size of the image taken. This size reduction may also increase the visual quality of the image. Click on the images below to see them at 1000 pixels wide and with a 100% crop in the corner to give you an idea of quality. There’s also a video of the rear and front-facing cameras as well.

Straight up: the keyboard is useless for anyone with larger fingers, I have smaller-ish fingers and I sometimes mash together 2 keys. I’m also not a fan of the placement of the secondary functions on some of the keys, I would have thought the semi colon and colon would be near the parentheses to create smiley faces for use on social networks / text messaging, instead they’re placed on the opposite sides of the keyboard. Looks like I won’t be making as many smiley faces!

Other than that, the keyboard works really well. In fact, it works so well that you can assign shortcuts to keys to launch your favourite apps from the home screens — brilliant! The keyboard also illuminates in darkness, which in some lighting arrangements is hard to see, but in the pitch black is excellent. The keys are solid plastic with the tops of them having a slight rubbery feel to stop your fingers sliding everywhere, which is a nice touch.

At 1250mAh, the battery in the ChaCha certainly isn’t small, however you do have to factor in what the device is actually doing with this power. The phone is designed around massive Facebook integration so it’s constantly updating news feeds, statuses as well as uploading images and videos at times, all this is going to eat through a battery.

My experience with the ChaCha gave me a little over 9 hours of battery life off of a full charge. In that 9 hours I watched nearly 2 hours of YouTube (HQ), sent ~20 texts, spent 22 minutes on the phone to Lucas , had all syncing options on like you usually would and Wi-Fi was switched off.

I made a 22 minute call to Lucas using the HTC ChaCha and he said the quality was really, really good. Noise cancellation worked perfectly, as he could not hear the music I had playing about a metre away from the phone at a fairly standard level — it wasn’t rocking the house. What’s interesting about this variant of the ChaCha on Vodafone is that it makes use of Vodafone’s new 850MHz 3G network. This new network is meant to be less congested than Vodafone’s 900MHz 3G network which is under a lot of stress. Since the ChaCha works perfectly on 850MHz and 2100MHz 3G, it means you can also use this device perfectly on Telstra’s NextG network. I would put my Telstra SIM in the device to test out the speeds, but I still can’t get the bloody back cover off!

Sense UI on the HTC ChaCha has been chopped and changed in order for it to better suit the orientation of the display as well as to fit in the extra social widgets that come with it. Overall everything runs quite quickly given that it’s only an 800MHz processor under the hood. Everything is set up perfectly to suit the display so I was never left feeling as though HTC could have designed it better.

You can customise Sense UI just like on most HTC devices, such as changing the themes, skins, widgets and change shortcuts on the lock screen, which is another great thing about this new version of Sense UI. The lock screen is the same as on the HTC Sensation, with its ability to jump straight into selected apps by dragging the shortcut on the lock screen into the ring. I found it surprising that out of the box the Facebook application is not one of these shortcuts.

The only downfall I found using the ChaCha is on the home screens, you have to buttons — on each of the bottom corners — the left side is to open the app draw, the right is to open the personalise menu. These buttons only appear on the first home screen, if you swipe across they disappear and to get to the app drawer you either have to swipe back to the 1st home screen or hit menu then applications. I see why they did it (it adds more space on other home screens) but it can be a real annoyance.

Whether you’re a fan of it or not, the centre point of the ChaCha is its Facebook integration. A part of that of course is the much talked about and somewhat disliked Facebook Button. I saw the good in the idea when I first heard about the ChaCha & Salsa, but was eager to see if it could really prove its usefulness. In short, it can.

All in all, I was extremely impressed with what the HTC ChaCha has to offer. It’s certainly for the Facebook lovers like myself, and really no one else. It would make no sense for someone to buy this device without having the urge to use Facebook, it’d be a waste of money. If you love Facebook, you like having access to YouTube and whatever else through a smaller display, then this is certainly the phone for you. HTC have certainly done well to create a phone that’s well below their high-end devices their used to creating.

The HTC ChaCha is available from Vodafone for $0 upfront on their $45 Infinite Plan which includes 500MB of data, infinite free standard local calls & txts and free access to the likes of Facebook, Twitter, Foursquare, MySpace & LinkedIn. You can also buy it outright from MobiCity for $469.

Aaahhh so this must be the phone they talk about on all those radio ad’s I hear that talk about getting the hair removed from your Cha Cha. Can only assume from the photo’s that this one had already been there!

Great review. Just Pointer you can buy the phone outright from vodafone or crazy johns for $300 AUD instead of buying from mobi city. Free unlocking too via vodafone website

Great review Buzz. It seems that this phone is the continuing the tradition of HTC’s excellent design and may actually do well in the market place. The only downside is the $45 infinite plan which sounds a tad expensive for that phone??

One question though – have you ever been tempted to crank the speakers up and scare the living bejesus out of your cat which it sleeps on the cushion? 😉