The HTC Salsa is the 3.4-inch touchscreen version of HTC’s two Facebook phones, and I have to say I recommend it only to the most hardcore of Facebook addicts. If you’re interested in the other ‘Facebook Phone’, check out our HTC ChaCha review, if not, hit the break to get into the Salsa review. 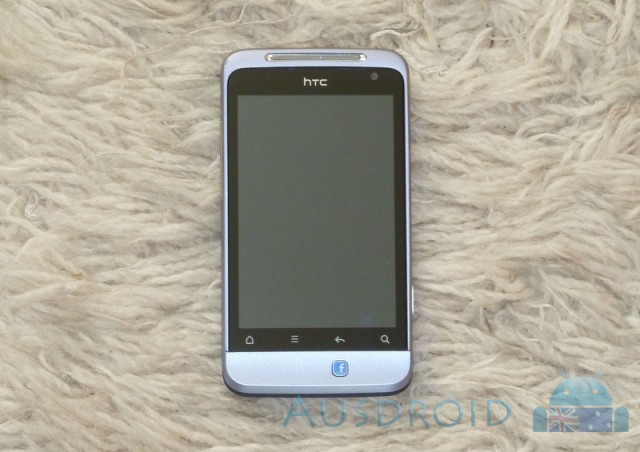 The styling is typical HTC quality with an aluminium body and small ‘chin’ at the bottom, similar to the Hero or the Legend. With a prominent blue hardware Facebook button on the front of the device you are under no illusions that this device is all about Facebook. A dedicated camera button on the right hand side gives you quick access to the 5 megapixel camera with autofocus and flash. There is a notification LED on the right hand side of the earpiece and the Facebook button also lights up, but we’ll get to that later. The Salsa also has a microUSB port, volume rocker and VGA front camera. The bottom of the device slides off to reveal the battery, sim card and microSD card slots. Removing the MicroSD card requires you to undo the battery clip, so i’m not going to class it as ‘hot-swappable’, meaning you will need to turn off the device to swap the microSD card. The 3.4” TFT display is responsive but the resolution is only 480×320. To put this in perspective most modern android phones have a screen resolution of 800×480 and the top end phones have 960×540 (qHD). The relatively low resolution means you can’t fit much on the screen at one time, requiring a lot of scrolling through web pages. On the plus side the low screen resolution does not require a powerful CPU which is great because the Salsa doesn’t have one. The 800mhz single core Scorpion processor would be woefully underpowered in most devices, but the other hardware and software specs of this phone have been matched well to produce acceptable performance. The 1520mAh battery is nothing spectacular but it is quoted to provide up to 530 hours standby on 3G. The Salsa achieves a quadrant benchmark score of 890.

The Salsa ships with a 2gb microSD card and has 512mb onboard storage. It is disappointing to note that only 150mb of this is available for app storage, and for most people this will fill very quickly. Of course apps can be moved to SD, and to their credit HTC do provide a wizard to facilitate the move, but the average user should not have to bother with regularly monitoring their available storage and moving app data to the SD card.

The 5 megapixel camera on the Salsa is quite capable as you can see from the pictures and video below. Colours are vibrant and detail is sharp, certainly good enough quality considering these photos are going to be uploaded directly to Facebook anyway.
[nggallery id=84]

The Salsa is ALL about Facebook. In addition to the standard suite of HTC Sense widgets, this phone comes with a number of specialised Facebook widgets. The standard clock and weather widget which is common to all HTC phones is joined by a combined clock and Facebook status update widget. There’s also a Facebook Chat widget and Friend Channel widget. Facebook has also been integrated into the standard apps such as Calendar, Contacts and Gallery which will automatically pull and display your Facebook events & birthdays, contact details and your friend’s photo galleries. The camera app supports immediate upload to Facebook which is both handy and slightly dangerous as I personally found out when a friend had a play with the phone. You will be happy to know that the big Facebook button on the front of the Salsa does more than just display your love of Facebook. During normal operation the button will take you directly to your wall so you can post an update or a photo, a long press of the Facebook button takes you to Places so you can tell all your friends where you are. The Facebook button also lights up when you are doing something it can share to your wall, such as listening to a song, browsing a webpage or browsing your gallery. The underlying Android operating system is 2.3.3 and HTC Sense is a graphically toned down version 2.1 due to the processing power of the phone. This means you still get the weather animations (although the phone does struggle to run it) but you won’t get the fancy 3D screen transition seen on HTC Sense 3.0 devices like the Sensation. You also get the HTC Sense lockscreen with the ability to set shortcuts straight to your 4 favourite apps, which I think is a great feature.

The HTC Salsa is currently exclusive to Vodafone and free on the $29 cap or $45 Infinite plan over 24 months, well priced considering this phone is suited for the younger market (or the young at heart Facebook user). The phone also supports Vodafone’s new 850MHz 3G network so you can expect solid coverage. Considering the hardware specifications of this phone it is likely to get old very quickly so I would only recommend this phone to the most diehard Facebook fan. If you’re just looking for a cheap phone you really couldn’t go past the Nexus S which is also free on the $29 Cap.

This phone is the perfect size and style for me but it’s specs are low. Notice how with phones the bigger the size the higher the specs? Surely technology these days could bring us a smaller phone with high end specs.

Good review Matt. The camera pics and video are surprisingly good. Nice spot there with all the trees around you. Filming the ducks reminded me of Anand from anandtech.com filming his dogs 🙂  You will need to upload those pix & vids to facebook to keep them as the paltry amount of storage onboard will run out in no time. Agreed, Nexus S is a no brainer on the 29 Cap.

… its purple… who on earth wants a purple phone?

Just a nitpick on units – ‘m’ is the abbreviation for ‘milli’, capital ‘M’ is for ‘mega’. And Hertz should start with a capital as well (even when abbreviated) because it’s named after a person.

Actually, I make that mistake too with “MHz” when writing documents. I’m surprised that no one at work has pointed that out to me.