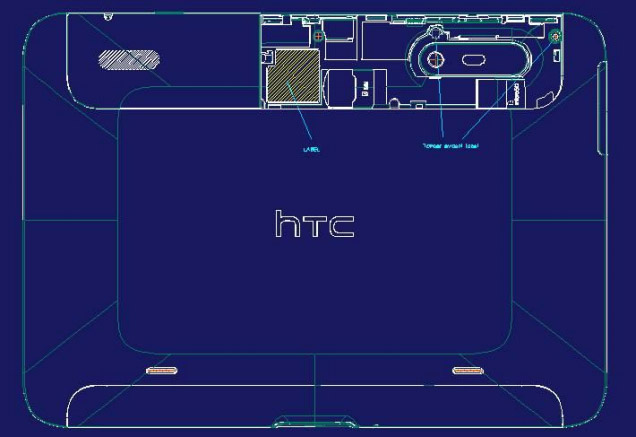 HTC’s elusive 10-inch Honeycomb tablet has recently passed through the FCC over in the states and has shown off a few of its radio frequencies as well as the blueprint above. The 10-inch tablet — that will no doubt run the shocking looking Sense UI for tablets we wrote about a few months back — will run on 850MHz 3G and since it’s in the FCC over in the US of A, that means it’s headed to AT&T and if imported here, could run on Telstra NextG or Vodafone’s new 850MHz 3G network. But what is interesting about the “Puccini” (codename) is that it supports LTE Bands 4 and 17 (~1700-2100MHz and ~700MHz respectively) which is spot on with Optus’ upcoming 700MHz LTE network and Telstra & Vodafone’s 1800MHz LTE networks; all of which are expected to be up and running by the year’s end.

I don’t know a hell of a lot about LTE (time to do some research) but it would be interesting if HTC’s tablet was one of the first Android tablets to run on an Australian LTE network. There’s no release date on the “Puccini”, though a late-winter date has been thrown around.

uummmmh, optus isnt planing on launching an LTE network any time soon. they are preferring to sit on their hands and wait. When they do launch their LTE network in the 700mhz frequency, voda n telstra would have run their LTE networks in 1800 for over a year/years. This is because both Telstra n voda are looking to launch 1800 LTE networks by year end. The 700mhz frequency is currently not available. its being used by your analogue TV signals which only get switched off in the second half of 2013. then time for installing and testing 700LTE…. so it will be a… Read more »

If I’m going to get my first tablet, it might be this but will wait and see what the reviews say.