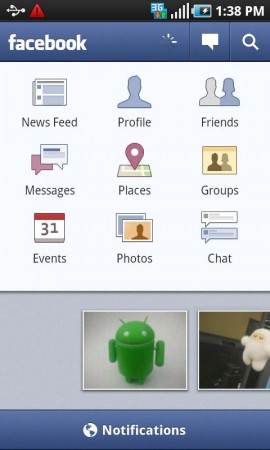 Update: If your device is running Android 2.1 and suffered problems with the Facebook for Android v1.7 update, there’s a new update to fix those issues (v.1.7.1)

We’ve been sitting on an increasingly outdated Facebook app when compared with our iPhone counterparts, but it seems that Facebook has decided to push out a decent update that brings a lot of improvements and can now be downloaded on Honeycomb tablets.

This is a great update with the biggest additions being able to tag people in photos and its support for Honeycomb tablets, although it’s just an enlarged version of the phone app.

So jump in the Market now and download the update.

I still prefer to use the browser

I updated the app on my Desire HD this morning and am getting force closes with anything I do apart from scroll through my feed. Sad face.

works well with my nexus s but bit slow n laggy and notification doesnt open at all..with my transformer..

works well with my nexus s but bit slow n laggy and notification doesnt open at all..with my transformer..