It’s not often we review games on Ausdroid, but when they are made by Australian developers, we’re keen to make sure we take the time to play them and show our support for the developers where we can.

As the name would suggest, Platinum Air Hockey (made by Australian Developer, Platinum Apps) is a simulated Air Hockey game available only on Android tablets. It has all the parts needed for a great Air Hockey game, 2 paddles, a puck and a table.

Platinum Air Hockey really does have a clean interface, there’s no splatter of excessive colour or buttons with endless options for the sake of it.
The game is really designed in a way that gets you quickly into the action and keeps you there.
The game layout is a birds eye view over the table with 2D graphics. It may not utilise a full 3D game engine like Unity or Unreal engines, but this could be due to the fact that it’s Air Hockey a game that even in real life has fairly plain graphics. 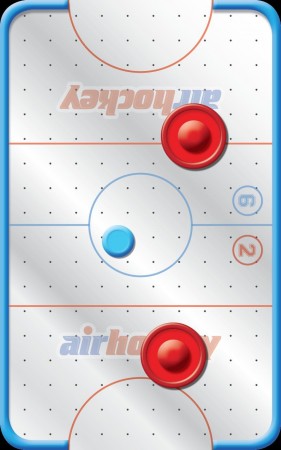 The game has single player and multiplayer options.
The single player mode is great fun and the game AI is good enough to make you feel embarrassed when it kicks your ass, but this game is really about the multiplayer mode.
Multplayer can be played either with 1 tablet where players get half the screen each to defend or over WiFi but in the same room. The WiFi option does require the paid version and since I didn’t have a second tablet to test on, can’t comment on how good the connectivity is.

The game is fun.
Single player is great but it’s the multiplayer mode that really shows you how much fun you can have. I spent the weekend going up against anyone who would play me and the game just kept up the excitement.
There were times when the puck would get stuck in the corner of the board and the game didn’t seem to handle pulling the puck out, this on a few occasions cost me a point or two, but didn’t detract from the overall experience.

All in all, it’s good to see such a fun game come from an Australian developer.
The ad-supported free version is good enough to give you a good feel of the what you can expect from the game before upgrading to Pro version.
The Pro version includes extra table designs and the WiFi multiplayer option. The ads aren’t obtrusive in the free version which is great, but this I think it more due to AdMob not being optimised for Tablets yet (I am not looking forward to the day they are). The simple graphics make the game look a little plain, but it looks like it was designed more for speed and performance which it’s certainly good at.

So if you like Air Hockey and want a game you can play with someone else, definitely pick up Platinum Air Hockey from the Market and do your bit to support Australian Android development.