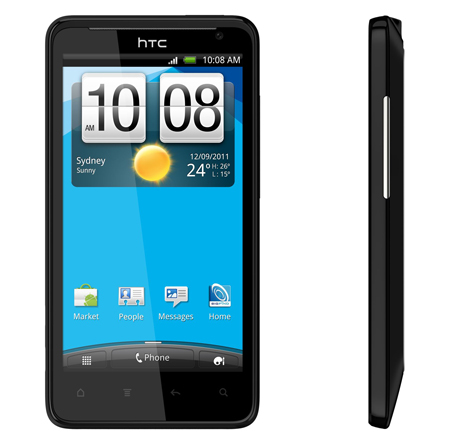 Telstra have today announced their 4G LTE network is available for everyday consumers if they live within walking distance of Sydney or Melbourne CBD, or one of the lucky selected regional areas (coverage map). Real world speeds are yet to be determined, though I’m sure we’ll hear from tech-savvy users in the coming weeks and months.

The real news for us here is that Telstra have flagged the HTC Holiday as their first 4G smartphone. ‘Holiday’ is the codename for the device that’s currently floating around the internet — in South Korea it’s called the Raider 4G and it’s also been rumoured to be called the HTC Rider when it launches in the US of A. But it’s not the name of the device that gets blood flowing to various parts of our body, it’s the specs, and they’re reminiscent of the HTC Sensation. Hit the break to check ’em out!

I have a HTC Evo 3D, Model (PG86310) working on the telstra Next G network. This phone comes up with 4G and 3G on the top of the phone. Does this mean I’m already accepting Telstras 4G when I’m in a 4G area or would I need some sort of update to get the 4G ?

At Telstra Melbourne customer centre today we ran speedtest on a 4G laptop and got 35Mbits/sec consistently. This was at Telstra’s Bourke St store. You can’t get closer than that. So the benchmark to remmember when they have heaps of users and performance issues and congestion bites in that it was 35Mbits/sec. Get it while you can but can you expect it to last? Does anyone know what the benchmark was for Telstra’s Ultimate product was? And what it is now?

so will the telstra’s  artix be getting 4g speeds. or do we need a software upgrade ?????

The US carriers have decided to brand HSPA (3.5G) as 4G in the US, hence the Atrix 4G, Sensation 4G etc.
In
Australia we consider HSPA to still be 3G. We consider 4G to be LTE,
which is what Telstra launched today, and the Atrix is NOT compatible
with it.

I would be wary of the “Shoots your face” feature …

Telstra are charging the same rates for 4G as they are 3G with mobile broadband devices. Cant see why theyd then charge extra for mobile phone. That said, the handsets will probably be expensive in their own right, so the total plan/phone package wont be cheap.

Not a bad phone but its basically a Sensation.  Same processor etc.  bit more ram, bigger screen (slightly).. LTE is a huge advantage but from what iread in the AGE they are saying at this stage its only if you are within 5km of post office in major cities (eg. melbourne, sydney etc).. and telstra will of course charge a fortune for it… I was going to say it will hopefully relieve some of the congestion on NextG but unfortunately it will only do that in the city- devices roam to nextG when not in LTE areas apparently.  So until… Read more »

If the 4G network reaches my region in the next few years, I’d take some interest.

Of course, Telstra is going to milk as much money out of the customers when they launch this service so I won’t be surprised for the first 6 months or more any phone that goes on that network will  be in the region of $79 per month. No thanks, I don’t want top wireless speed that desperately….