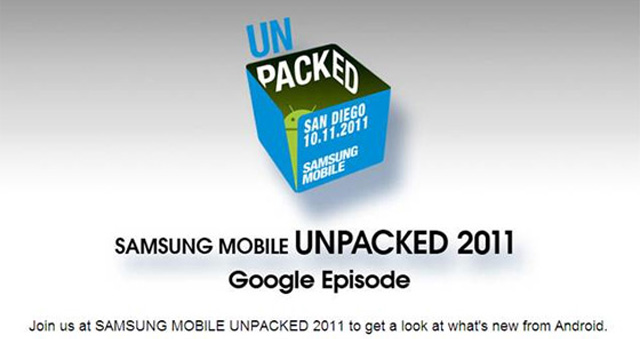 We`ve seen the video this morning of what appears to be Ice-Cream Sandwich running on a 2nd hand Nexus S, now it appears that Samsung and Google are sending out invites for an event on October 11 at the CTIA Trade Show in San Diego.

From the invite it appears that invitees are will be introduced to “Get a look at what`s new in Android” and also tantalisingly the event is being described as a “Google Episode”, could this be the grand unveiling of Ice-Cream Sandwich on a new Nexus device (Samsung Nexus Prime, Google Nexus Prime, Samsung Galaxy Nexus)? The event at CTIA is scheduled for 11:30am on October 11(05:30am October 12 for me in NSW), there is a live feed of the event from http://youtube.com/Android, which is another indicator that the event has something major to do with the Android OS, so i`ll definitely be tuning in for this. More After the Break

We know that Samsung will be releasing ‘something’ at CTIA from this entry in the awards section :

And further down in the Shutterbug section we also have another device although this device is not listed as a Samsung device so not sure if this is related :

We also know that the GSM Version of the Samsung GT-i9250 the phone which is rumoured to be the next Nexus device has passed through the BlueTooth SIG for Certification and is showing as carrying BlueTooth 3.0, so this version should be compatible with the Vodafone/Optus networks.

One thing I`m still waiting for is the traditional pre-release delivery of a dessert themed statue to the GooglePlex like we have seen for the rest of the releases like Honeycomb & Gingerbread, i`m hoping we see a statue delivery in the next week or 2 which would be another good indicator that another dessert themed release is about to burst forth. But for now i`ll be tuning in on October 12th, will anyone else be joining me to watch this event?

Source: This is my next.

What are you talking about? None of what you said has anything to do with anything.
Whats bluetooth got to do with provider?
Whats 802.11n got to do with Telstra?
What does NFC have to do with satellite phone?

You sir have no idea about phone technology AT ALL.

You sir, should turn on your sarcasm filter. and then re-read the article “We also know that the GSM Version of the Samsung GT-i9250 the phone which is rumoured to be the next Nexus device has passed through the BlueTooth SIG for Certification and is showing as carrying BlueTooth 3.0, so this version should be compatible with the Vodafone/Optus networks.” Since when does having Bluetooth 3.0 mean its going to be on the Optus/Vodafone network ( i know its due to the way its worded). My comments are a play on this little slip up; in reality, the author is really talking… Read more »

A Secret
Reply to  Anonymous

Even the dumbest carriers are not likely to try pushing BT or 11n around the streets are they?

its clearly nuthin to do with nuthin!

Pwoarrr, let’s replace those quotation marks with apostrophes!
Don’t really wanna be a Nazi, but it takes away from the quality of the article.
Good read nonetheless 🙂