Home News and Editorial Sony’s ‘PlayStation Certified’ Tablet S is now up for preorder, will set...

Sony Australia has just sent through an email advising the Sony Tablet S is now available for pre-order in Australia. If you do this before October 19th they`ll throw in a bonus Charging Cradle and free shipping, with units beginning to ship October 21st. More after the break

They focus on the ergonomics of the tablet, which I personally like the idea of, I just can`t wait to actually hold one. Seen here is the wedge and how it relates to what looks like a more natural feel in the hand: 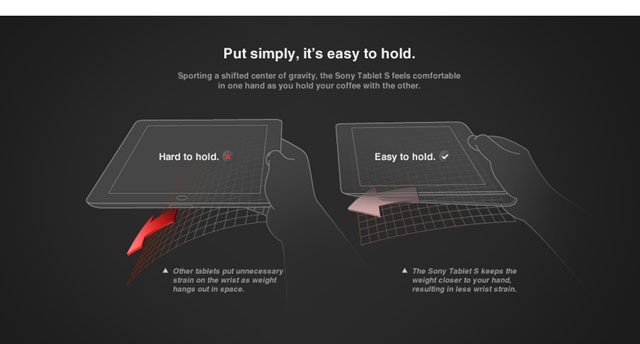 The wedge is at a 4° angle when rested flat on a bench, personally I can`t wait to try to see how it feels and at 598gm it seems light enough compared with other tablets of similar screen size out there, also the charging cradle they`re throwing in would probably look pretty decent on the desk, throw in a BlueTooth keyboard and you`re set.

The Tablet S is a PlayStation™ Certified device so you can play all the Playstation games in the market like Crash Bandicoot, I can`t wait to see Sony expand the possibilities of the PlayStation™ Certified devices and make a larger amount of games available, there are some decent ones on there but there was at least over 1200 released for the PSOne and if we could get a larger portion of those games added plus add the option to connect a PS3 controller to play them with, the Asus Transformer has this capability

Personally i`m really interested in the IR Remote control function this would be fantastic as a remote control, they give a basic overview of it here but i`d like to know if this can also control the PS3 which is a BlueTooth based remote control but i`m hoping it does.

Watch their TV Commercial for the Tablet S:

I can`t wait to see one of these in a store, the design appears to be just different to maybe work. What do you think of the design of the Tablet S

I hope this tablet sells well for them..

I’m more interested in the Tablet P. It’d be great if a device like that had call/text capability – I think I’d just use a tablet if that were the case.

I wonder whether Notion Ink are going to sue Sony for that shape.
Oh, hang on…

I have been waiting for this to be released since the day I first saw details on line. I’m not even concerned about the price tag since the specs are so impressive and the bonus dock is a definite sweetener.

No doubt that Sony can make beautiful hardwares and turn ’em into very innovative tools. But the rear camera is only 5 megapixels?? What is up with that??