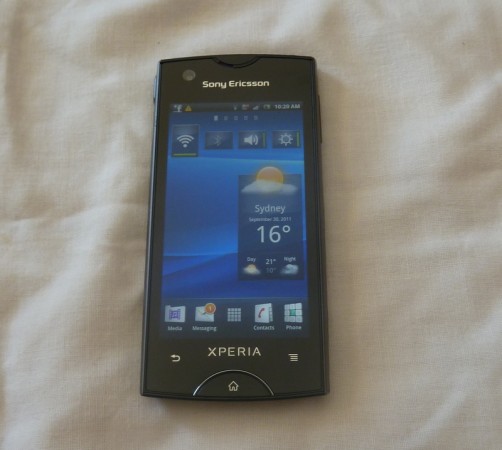 The Sony Ericsson Xperia Ray is the sleek, compact yet powerful new phone in the Xperia range. The Ray can best be considered as a baby version of the Arc, with which it shares CPU, screen resolution, battery size, camera and memory, but with a few added features such as a front camera. Due to its compact size it will suit people who prefer a smaller phone. The Ray was announced all the way back in June and has hit Vodafone exclusively this week. 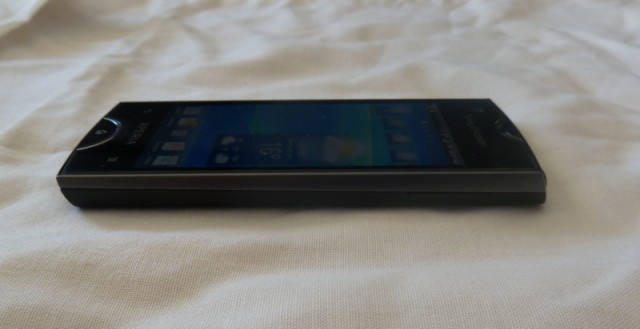 The build quality is high as expected from Sony Ericsson and also stays true to the Xperia stylings of its predecessors the Arc and the Neo. Both the Arc and the Neo had hard silver buttons for back, home and menu which I was not a big fan of, whereas the Ray has three soft buttons which are not only easier to press but also give the phone a cleaner look. The front of the phone is smooth and clean with the VGA front facing camera at the top left, and the back, home and menu soft buttons at the base. The home button looks like a soft button but can be depressed, and the outline of the button lights up to serve as the notification LED. The notification LED is a small but handy feature that can notify you with different colours of a missed call, email or SMS by just glancing at the phone. Over time this saves battery life because you are not required to turn on the screen to check. Pressing the home button will wake the phone from sleep, which is great because the power button is in a really uncomfortable position.

On top of the phone are the power button in the centre and a 3.5mm headphone jack on the right hand side. The power button is a bit of a reach even on this small phone, that’s why it’s lucky the home button wakes the phone from sleep. The right hand side of the phone has only the volume rocker, there is no dedicated camera button on the Ray as there was with the Neo and the Arc. The dedicated camera button was good as a quick shortcut into the camera app but honestly I don’t miss it on the Ray. The lack of the camera button also contributes to the cleaner look SE are going for on this phone. At the top on the left hand side is the microUSB socket and on the base is the microphone. On the back is the 8 megapixel camera capable of 720p video recording and a ‘photo light’ as opposed to the usual LED flash.

The Ray weighs 100grams and feels light and slim in the hand. The back has a slight rubbery feel which grips well in the hand, assisted by its small size which makes it easy to operate one-handed even for people with smaller hands. It has an FM radio which comes in handy and of course includes aGPS for location services. Also of note is the impressively loud single speaker on the rear of the phone.

At a time when manufacturers such as HTC and Samsung are releasing 4.3” monsters (not to mention rumoured 4.65” beasts!), the Ray seeks to address the other end of the market who prefer something more compact. The Ray has only a 3.3” LED-backlit LCD screen but retains a 480×854 screen resolution to give a pixel density of ~297ppi which is higher than the majority of phones out there. Partner that with SE’s Mobile BRAVIA Engine and you have one stunning display. As with previous Xperia phones the screen also has scratch-resistant mineral glass which prevents scratches from coins or keys in your pocket or bag.

Powering the Ray is a single core 1GHz Scorpion processor, Adreno 205 GPU, MSM8255 Snapdragon chipset, the same one in the Arc and the Neo. This is no dual core powerhouse but it’s also the baby of the Xperia range so it doesn’t really need to be. It has 512mb ram which again is low compared to today’s flagship phones with double the ram, but it will be sufficient for the entry-level and casual user. Disappointingly the phone only has 300MB onboard memory for the user which means a few large apps will fill the internal memory rather quickly. This is one of the negatives in an otherwise pretty decent phone, and I hope Sony Ericsson will start to add a decent amount of internal storage to future devices. Of course application data can be moved across to the included 4GB microSD, but this is not going to be immediately obvious to the new or casual user. The Ray supports up to 32GB microSD if you want to upgrade in the future.

The Ray features the same 8 megapixel camera with Exmor R sensor that I loved so much on the Neo. With the Exmor R sensor providing quality pictures in low light conditions, the image stabiliser and face recognition and detection, the Xperia line of phones really do have some of the best phone cameras out there. The Ray does not have the dedicated camera button that the Neo and Arc had, however I found the camera button could at times blur photos anyway. I much prefer the ability to tap anywhere on the screen to take a picture, as opposed to some other phones which require you to hit the shutter icon. The video camera can shoot at 720p and features video stabilisation, great to see in a phone of this size and price. For a relatively small phone I was impressed to see a 1500mAh battery also from the Arc and Neo which in theory should provide longer battery life given the smaller screen size. The battery easily saw me through the day with light to medium use however your experience will vary depending on usage patterns. Even so, a 1500mAh battery is sufficient for a device of this size.

Our review model was the ST18A which supports UMTS (3G) 850, 1900 and 2100. On the Vodafone network this phone will support the 2100 network used mainly in metro areas and the new 850 network, but won’t support the 900 network used in some rural areas. The Ray also supports ‘HD voice’ (WB-AMR) where the network supports it, which Vodafone currently does not, but Telstra does. In terms of data speeds the phone can operate at a maximum of 7.2Mbps down and 5.8Mbps up which is around standard.

The Ray ships with Android Gingerbread 2.3.3 and if that writer from Somobile in the UK can be believed, is a good chance of seeing the next version of Android Ice Cream Sandwich some time in the future. The CRT screen-off transition has been retained in the Ray and is one of my favourite features of Gingerbread. The default keyboard for the Ray in portrait mode is a T9 style keyboard (ABC, DEF, GHI, etc) which surprised me at first but it makes sense given the small 3.3” screen. The keyboard switches to full qwerty in landscape mode. I haven’t used the T9 style of keyboard since I owned a Nokia N95 but I found it quick and easy to use. If you don’t like it you can always replace it with any number of free and paid keyboard alternatives from the Android Market.

As with previous phones in the Xperia range the Ray features a good level of Facebook integration in the gallery and music player, and includes the TrackID service to identify music in a similar way to Shazam or Soundhound. As a Sony Ericsson device the Ray comes pre-installed with Music Unlimited, an online music (and video) service with access to over 7 million songs that can be streamed to your phone or any other compatible device for a monthly subscription fee. While this may not be to everyone’s liking it is good to see it comes packaged with legitimate access to purchase and stream new music. Sony Ericsson claim that streaming music will use 22MB data per hour, and video can only be streamed via Wi-Fi. Don’t let the Ray’s small size fool you, it is quite capable and punches above its weight in the benchmarks. On Neocore the Ray scored 62.0 frames per second, and achieved a quadrant of 1700. Both benchmarks were run after a fresh reboot and the highest of 3 consecutive tests have been reported.

This phone will appeal to people who want a physically smaller phone without compromising on features. Vodafone have it available now at $5 per month on top of the $29 cap or $5 per month on top of the $45 infinite plan both on 24 month contracts. Personally I feel it is overpriced on the $45 Infinite plan considering the incredibly popular Galaxy S II is currently free on this plan until 4 October, but with such a significant size difference maybe they will appeal to different people anyway. The Ray is small and light with a clean design and an awesome camera, and the fact it shares most features with the popular Xperia Arc but in a much smaller package shows the calibre of this phone.

The video at 720p was quite good considering you were shooting into the sunlight. It coped with the sudden light change well too. I reckon it could suit someone who wants a good quality, smaller sized, camera phone with Android.

Is it me or are the test pictures really really bad quality when viewed full size ?