Hotmail, the worlds longest standing free cloud email solution has finally delivered an official app in the market for Android. With a reported 355 million active Hotmail accounts worldwide at the end of 2010 (compared to Gmail figures of 193 million), it’s surprising that it’s taken Microsoft so long to deliver an app for Android devices.

But does it tick all the boxes?

So have they just copied the functions of the native Gmail app and pushed it to market?
No, thankfully they haven’t!

One thing I really like (and would LOVE in the Gmail app) is the option for “Quiet Time” when your data does not automatically sync to your device. Giving you the option to decide what days this occurs, and what times of the day. This is not a new feature as such, the K9 mail app has done this some time ago where they would still sync your emails incoming but not put an audible alert or vibration associated with this email.

So why use it? 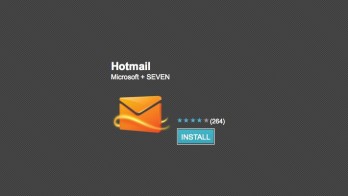 If you’re a heavy Hotmail user who has an Android and have not yet discovered Gmail, this is probably very exciting for you.

For me though – It’s not a particularly pretty app, it’s not particularly easy to use, it’s missing options to customize your notification sounds and it’s scrolling through email lists and tagging in the app is quite clumsy. Like so many other users, due to their ever increasingly cluttered web interface and ridiculous amounts of spam that reached my inbox, I abandoned my Hotmail account years ago! Now only using it for my MSN sign in so having to install ANOTHER app to access an email address I rarely look at is simply not something I’m interested in. Uninstall complete.

Just a front-end for setting up your Hotmail account as an Exchange server account via Settings -> Accounts, which everyone’s been able to do for yonks. Bite my bum.

If only they’d done this a few years ago. I much prefer Hotmail’s interface over Gmail, but lacking an app for Android I quit Hotmail for Gmail once I got my first Android device. No chance of migrating back now, even if it is better.

Thing that is missing from the stock android app, set up with ActiveSync (that the HTC mail app has) is move to folder.
It seems that you can’t do a bulk move to folder in the Hotmail app either. You can move individual mails though.

Has anyone noticed the permissions associated with this app….does it seem a bit excessive?

It is perhaps worth noting that Hotmail/Windows Live Mail has been available via ActiveSync for quite a while now.  The native “Corporate” account support in Android will sync email/calendars/contacts from it quite happily without any additional apps, so I’m not quite sure what the point of a separate application is, except perhaps to simplify setup.