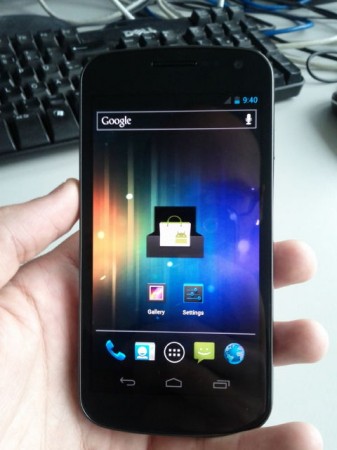 Update: The video is back! Hit the break to check it out.

You know that device we’ve been muttering on about for the past few months? Yeah, the Nexus Prime. Well a video of it in use has finally hit the web. The guy whom apparently posted the video that the device is codenamed ‘Tuna’ and will launch as the Nexus Prime, not this Galaxy Nexus crap. He also went on to confirm the lackluster specifications that BGR posted. If the video appears somewhere, we’ll be sure to post it.

After watching the video it’s clear to see that it’s very much Honeycomb made for the size of a smartphone. The graphics look nice although some touches don’t seem to respond, we’re hoping that’s just the early software.

at the end of the vid when he goes into the camera app there is no back or home button. how do you get out?

i hope source will be released

Source will be released.

Here are a lot of pictures: http://schuleundfreizeit.blogspot.com/2011/10/android-40-ice-cream-snadwich-bilder.html

Jesus, I just bough myself a Samsung Captivate (wanted to move to telstra, and it’s fairly cheap now on ebay, and has a hardcore dev following).

I love my Captivate to bits.

The Nexus Prime makes me want to sell my captivate and upgrade. ICS just looks awesome!

Wow, now THIS looks good. Much better than that previous leak with the Nexus S. The phone looks great (looks longer and not as wide as the SGS2), but most importantly, ICS looks freaking awesome!

Love this look. I really like how this has turned out. Whew. I was honestly a little worried before.

I’m seriously considering selling my SGS2 for this lol.

Ok the phone looks alright (the SGS2 looks way better) and ICS is cool (literally lol) indeed but I don’t like the soft keys…I don’t even like the capacitive keys on the new handsets but I am not gonna have any choice I guess. It looks like SE is the only company of the well known brands that makes handsets with hard keys. So you can either choose performance (SGS2, Nexus) or comfort (Droid 3, Arc S etc)…It’s more like a Nissan Skyline vs Ford Fairmont. Put it this way, we need a hardware keyboard for selecting small hard to… Read more »

I know right, hardware buttons just feel so good. I wouldn’t mind a phone with capacitative buttons, but I dislike the idea of ‘buttonless’ phones. Buttons give the device some style, with the screen off that is just going to look like a black brick!

Even in the vid, we see the problem with those buttons, half the time they don’t register

Seems a fairly early build — if it’s not, there’s no justice in this world.

That’s fucking sexy!
So glad to hear it’s not going to be plastic!

nice!!! So basically its a big Nexus S from the front?  Not entirely a bad thing… not really impressed if they are the specs… i heard a few other things saying that if you believed BGR then you were in for a nice surprise next wednesday (our time)….

And to think that really WAS ICS we saw running on the Nexus S that was purchased from ebay…. ooops.. or a deliberate ploy by Google to create a bit of PR??