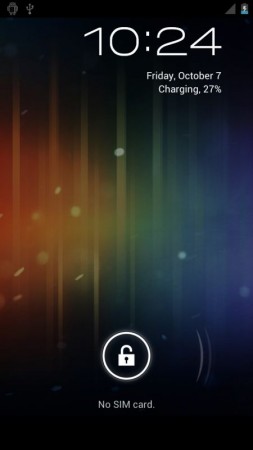 If a video of the Nexus Prime hasn’t got you excited enough, screenshots from the device in question have begun to appear online. They confirm the version of Ice Cream Sandwich to be Android 4.0 and that the Nexus Prime is indeed codenamed ‘Tuna’ like the video owner said. The overall UI is pretty much a smaller version of Honeycomb, which I’m fairly excited about — I may even go back to stock Android from my current TouchWiz ROM on the Galaxy S II. Screenshots below for your viewing pleasure.

Looks great. I hope it comes to the SE Xperia Arc.

at the end of the vid when he goes into the camera app there is no back or home button. how do you get out?

I like how they came up with an alternative to “end of scroll bounce”.  That screen peel-up.

One thing ICS has to do is wipe out all the niggling Patent issues.

looking very very good. soon it will be so complex that no one will know what to do with it

It will but the home, menu, back and search keys will be useless as the while phone is controled by toucch

I’m sure it’ll be there in some form or another.

Could pop up in context sensitive situations. I guess that’s one of the advantages of softkeys, you can add an extra button!

That looks so good!!

So much better than that old Nexus S leaked video. If this is stock, I don’t think I’d run any launcher over it. Looks awesome.