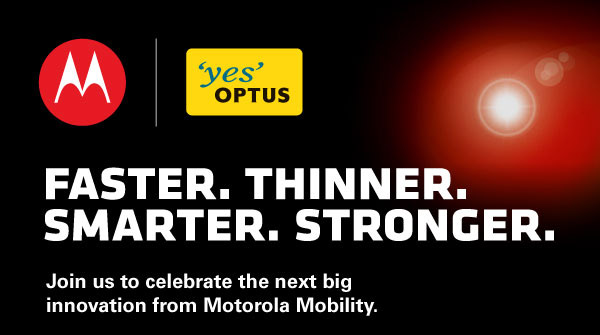 We’ve just received an invite to a Motorola / Optus launch event that will take place on October 27th. The invite image itself didn’t give us much to go with in terms of what would be announced, however, an attached video did give us a hand. The imagery in the video shows signs of lining up with some of the specs This is my next listed in their exclusive on a device called the Motorola Spyder — it’s set to be called the Droid RAZR in the US of A.

I’d hate to see the “Droid” name being used in Australia as it can confuse consumers between “Droid phones” and “Android phones” (it’s also owned by George Lucas), however, I do believe this device may have the RAZR name thrown in there somewhere. RAZR HD perhaps? The Spyder has a 1.2GHz Dual-Core CPU, 4.3-inch qHD display, LTE (maybe?), 8MP Camera that shoots 1080p, a “HD” front-facing camera. Much like the Atrix, the Spyder will be able to dock with Motorola’s accessories such as the Lapdock laptop-thing.

The fact there’s no other carriers shown on the invite besides Optus makes us think that this will be an exclusive; from the look of those specs, quite a nice exclusive as well. We’ll let you know if anymore details come to hand.

I think it is time for Optus to have some exclusives.

In other Optus news I am glad to see they’ve finally stopped stocking the Motorola Quench, cupcake in 2011… seriously?

i guess we will know on the 18th as they sent out an identical version of the invite to US journos but on the 18thMotorola and Verizon Wireless to come “celebrate the next big innovation from Motorola Mobility” at an event on October 18 in New York. The words “Faster. Thinner. Smarter. Stronger”http://news.cnet.com/8301-17938_105-20118043-1/motorola-verizon-to-debut-droid-razr-oct-18/

i agree Spyder sounds better, plus Razr should be left for a flip or slide out phone not a slab of glass

Well I for one hope it’s way better than anything else Motorola has released. Even the greatest and latest (at the time of writing) Motorola phones seem to be no match to the S2 (based on YouTube reviews I have seen). This is especially evident in pinch&zoom, scrolling through web pages, loading sites etc. The S2 scrolling through web pages as well as zooming in and out is as smooth as butter (like the iPhone) while the Motorola ones seem to be choppy although they have 1GHz Dual core and 1GB RAM. Also on start up the S2’s RAM seems… Read more »

Motorola phones are quite lacking, I agree. I’d like to see them do something right, they’ve absolutely terrible lately (6-12months).

It’s not possible to register for the event — it’s media only.

hope its as good as the Atrix hey Buzz? 😀

BTW: I agree on the whole Droid name thing… annoys me big time…

processor rumoured to be??

Not sure, but if Motorola have half a brain it’ll be an OMAP 4.

The Atrix needs to be killed. And soon.

even a thin atrix would be pretty cool
can’t wait