If you couldn`t tell from my last post on NFC, I find the idea of paying for things with NFC or doing anything with NFC an exciting prospect. Now a hack has appeared over at XDA Developers that allows Nexus S owners outside the US to set up Google Wallet on their phone. Hit the break for more info

To start with the hack requires you have root access to your phone. Luckily the place that has the hack is also one of the best places for information on how to root your phone, XDA Developers. Initially the hack required a full wipe and reinstall of your ROM but now all that is required is root access and the zip file, which is loaded through Clockwork Recovery. After some issues connecting my Nexus S to my Windows PC (Hint : PDANet from JuneFabrics had a driver that worked) I eventually got root access and installed the zip file containing the Google Wallet APK.

Now as part of the introduction of the Google Wallet service, Google are offering a $10USD prepaid credit card linked to your Google Wallet account to all who sign up, it`s this $10 credit that makes this hack work outside of then US, unfortunately once you use it, that`s it, there is currently no way to top up your account, but if anyone has a way to do it, I`d love to hear about it.

After all this, I can say I have used Google Wallet to make a purchase and it was Awesome! It did confuse the attendant a little but i`m sure this will pass once Google Wallet is introduced into Australia. Mastercard have actually released a PayPass Locator app that you can get here and use to locate business`s that have the PayPass Terminal. A bit of a shoutout to Twitter for finding me a terminal before I found the PayPass app. All the terminals I`ve seen so far support both Mastercard PayPass and Visa PayWave, but as Mastercard are providing the infrastructure at this stage, it`s Mastercard PayPass that we want, FYI the terminal I used looked like this : 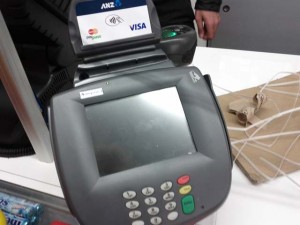 I have recorded a quick walkthrough of the Google Wallet application so you could get an idea of what is in there (FYI I`ve changed the PIN since recording the video), I recorded this before I made a purchase and the purchase now shows up in the history section.

So now I just have to wait for Google to launch this in Australia or work out a way to recharge my account, hit the source link below to go to the XDA forum for the Google Wallet zip and instructions.

Can you use a Visa card with Google Wallet NFC? or just a mastercard?
I´m using a google nexus with a US sim card but currently living in southamerica, so I might go and try it in a starbucks :;)

This thing is irritating me.. Hi guys.. I’m trying to set up my google wallet. I’m an international student who came to Australia on Feb. Google Wallet is asking me to provide Government Issued Id and a Bank Statement or Utility Bill. I’ve submitted my Passport and My Bank Online statement and still the google refuses to accept them and activate my account.. There is no way I could contact anyone from the help and support.. Has Google become sooo dumb… How can a student provide some documents.. I currently do not have any Utility bills… How can I resolve… Read more »

Hi. A year later… is this still the case? I’ve googled around, but I can’t find anything more recent about the Google Wallet situation in Australia

I cannot install google wallet on my Galaxy S3. Is there anybody knows how can I install it?

Does anyone have a Citibank card they can try and top-up with?

Nice posts about NFC (and other topics) Daniel. And I see you are not the only Australian interested in NFC. I found some useful info here. My website is about available NFC enabled Phones. Lists by country and by carrier. Also a page with an overview for Australia. http://www.nfc-phones.org/australia/ Nexus S and Galaxy Nexus are very well equipped with embedded secure element AND SWP, other handsets have a secure element OR SWP inside. Maybe some NFC-stickers or an AIO NFC-SIM-card can do the job, but participating some virtual wallet also depends on business decisions. Google said their wallet doesn’t work… Read more »

Any chance you can tell us which ROM you used to run this? Better yet, all the zipfiles you used?

How can i add fund into Google Prepay card in Australia?

No Idea but Google Checkout just merged with Google Wallet so maybe it`ll be coming soon, also heard on the grapevine that Comm Bank in Australia are looking to start this up

Used it in frankston today, 7/11 terminal (same as picture) crashed and showed a error code, tried a JB Hi-Fi, kept asking for a pin, entered the one it showed and crashed, tried it at bunnings, worked straight off no problems.

Where did you use it in Australia? Reports are that the transactions are being declined after being asked for a pin.

Daniel Tyson
Reply to  Deubunker Me

I tried using it today at a 7/11 in Melbourne. The machine kept asking me to enter my PIN, and the Google Wallet PIN was rejected. I looked quite the fool.

If the only reason you can’t top it up is that you need a us credit card then you can try a virtual credit card like entropay (https://www.entropay.com/). I’ve used this in the past to buy where websites only allow us credit cards.

I`ll check this out and update if it`s feasible

If only I had an nfc phone..
Hope the nfc stickers or galaxy nexus comes out soon

I have the Korean battery with NFC, Is this going to work ?

Very interesting Question, i`m not too sure, be interesting to find out, if you have root+the battery with inbuilt NFC+Nexus S it`s fairly easy to install

I gotta admit, while the concept is awesome – I have no
shortage of concerns regarding security too.
Considering I still need to carry my wallet with my driver’s licence,
other cards and ID in it anyway, the main advantage I can see of using PayPass
on my Nexus is convenience of not having to muck around swiping cards and
entering PINs.

If it wasn’t for the fact that we’re limited to a sole $10
credit with no means of top up, I’d definitely give it a go!

This is certainly great news but also more reason why some security is needed on your phone to protect you from hackers, spyware. Does Visa or the Bank provide you with some sort of guarantee on your transactions like they do when you buy online?