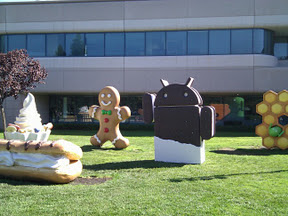 This photo was put up on Google+ by Michael Soland who, according to his LinkdedIn profile, is a Software Engineer at Google. So the appearance of this statue further confirms that the Ice Cream Sandwich iteration of Android will be announced, and hopefully will arrive, soon. The arrival of a dessert themed statue at the Googleplex has traditionally been the forerunner for the release of their latest mobile operating system. With the just confirmed Samsung/Google event occurring next week on Wednesday, this is a good sign we’ll be snacking on some ‘Ice Cream Sandwich’ goodness shortly.

Update : Video has just gone up of the Statue being delivered :

I’m really keen to have ICS on my GSII, but instead of waiting for Samsung to update the phone, If I was to root the phone, and install a vanilla version of ICS, (lol, vanilla ice cream sandwich… I crack me up!) would rooting the phone void the warranty?

yet rooting a phone will always void warranty. You can unroot it and reset with a usb jig if you ever want to send it in for warranty repairs that is assuming the phone is in a condition to do that.