Home Mobiles NTT DoCoMo in Japan says the Nexus Prime will be shipping in... 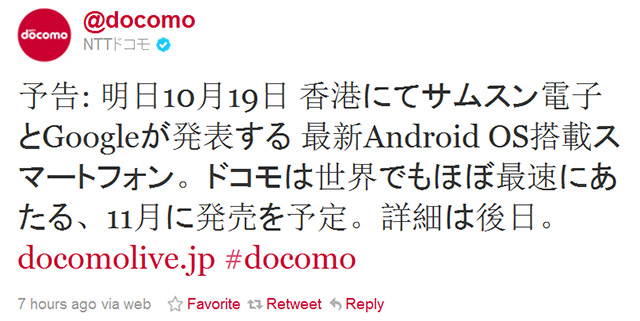 One of Japan’s leading carriers, NTT DoCoMo, have announced via their Twitter account that the phone Samsung and Google plan on launching tomorrow in Hong Kong will be available from them in November. The tweet is as follows in English (via Google Translate):

Notice: the latest Android OS smartphone with Google and Samsung Electronics announced on October 19 in Hong Kong tomorrow. DoCoMo is almost equivalent to the fastest in the world, scheduled for release in November. More later.

They never mention the Nexus Prime by name, but I think they give enough information there to give it away. Whether it be a publicity stunt or not, it certainly has everyone’s attention. Interestingly, NTT DoCoMo use 800/1700/2100MHz 3G as well as a 4G LTE network — maybe the Nexus Prime will be LTE after all.