Home News and Editorial ASUS Transformer Prime coming to stores in January 2012, price to be... 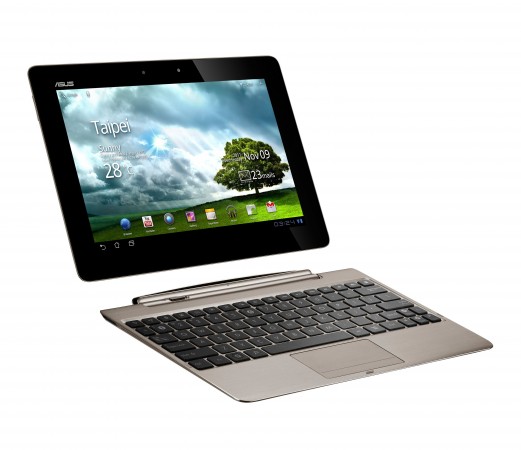 It’s official, the ASUS Transformer Prime will be launching here in Australia in the New Year, more specifically a release date in January. Price is yet to be confirmed by ASUS however we’ve heard something around the $700 mark. The Transformer Prime is the first Android device to launch with NVIDIA’s new Quad-Core (or Penta-Core) Tegra 3 SoC. Other specification for the beast include..

Given the release date, it’s possible that the Transformer Prime might launch with Ice Cream Sandwich, however, we don’t see the likelihood. Move out of the way Samsung Galaxy Tab 10.1, there’s a (harder,) faster, stronger, better tablet coming to town.

Hi tweeps, received much love for the Transformer Prime! In stores in Jan 2012. Price is still TBC. More information when it’s confirmed 🙂

Centrecom have it up for pre-order:

Just FYI, there is no price for non keyboard but if you gave them a call you could probably find out also find out if it’s official pricing (As set by the manufacture) or just a guess

Don’t forget that it will likely include the keyboard accessory for the price, so it won’t be that bad a price in that regard.

What about release dates to other parts of Asia? Really looking forward for this tablet.

Unless it’s competitive with US prices, no way am I paying Australian prices for this. In fact even UK prices without vat which is usually cheaper than Australian prices is still more expensive than US prices >_<
Time to hit the grey import markets on ebay or ask a mate studying in the US to help me out lol

or guess I’ll wait for MWC next year and see what other manufacturers like Samsung is gonna bring to the table next year.

you will be waiting forever

Think I will be waiting to see what Samsung bring to the tablet table in February before I jump on the Transformer.  Like the idea of having a keyboard, but love the idea of the big screen and nice display.

Says it is Retina display level (~320ppi) but my calc comes out to 260ppi, which is still good.

If I get this, I’ll be importing it or at least saying to my relatives and friends – don’t give me a present for my birthday, just give me some money and I’ll put it towards the Prime.

Matter of fact, I’ll tell ’em to give me the money and I’ll still import it. No way I’m gonna pay Australian  prices even for these beauties.

What ever happened to the idea of having a tablet that you doc your phone in? Things have gone quiet on that front lately. I was holding out for one but if they aren’t coming any time soon then the prime will might just be my first tablet.

No release dates yet http://event.asus.com/mobile/padfone
If the ‘fone’ is as good as or better than the sgs2 then I’ll wait. Hopefully it will be with a Tegra 3 under the hood.

Weren’t Motorola showing that technology off at CES 2011?

So buy from the US Ebay site then…?

Interesting, very cool that there’s finally details on the launch, but I think I’ll stick with a Transformer V1, all I’ll be using it for is comics/books/tv shows. Hopefully the launch of the Prime will drive the prices down.

is that $700 price tag with or without the keyboard?

Not too sure, just a price we’ve seen thrown around with no specifics.

So almost a 50% premium on the US price? faaaaaaaantastic.

Which is why anyone I know will simply import it instead of purchasing locally… I try to support local business but in tech stuff it simply seems financially stupid to do so.