I’m not usually the kind of guy that puts his phone away in a case to protect it or to make myself look exclusive and awesome, however, when Arnold Aranez — you may know him as @mr_gadget — offered to send me a couple to review and then give away, I jumped at the chance. There will be no bias here, I’ll call it how I see it like always — I feel I need to point this out because trolls be trollin’.

I’ve been using the black Aranez case (there’s also white) — some might call it a pouch, I feel a Kangaroo pun coming along.. — for nearly a month now and I’ve come to really like it. It makes the device seem more important and exclusive when it’s wrapped in leather. Not only that, but it made me feel as though I couldn’t damage the phone even if I happened to drop it. The Galaxy S II fit in tightly enough that it would never slip out therefore letting the case take the brunt of the impact when dropped, but is also loose enough that you can remove it by either grabbing from the small opening at the top or push it up from the opening at the bottom for the Micro USB.

Like all things in life, there are some negatives to go with the positives, luckily here there’s only a few. I did struggle at times to remove the Galaxy S II from the case when my hands were greasy/wet/slippery, however, you can push the Galaxy S II up from the bottom opening and have at it that way. It’s nothing major but it does need to be pointed out. I also found that during the first week or so of using the Aranez case it would press up against the volume rocker and if you put the Galaxy S II into the case unlocked for whatever reason, the case can put your phone on silent or loud — which can be either annoying if it’s on silent and you miss a call or embarrassing if it’s on loud and you’re in a meeting or something like that. This problem died down after the first week, but I did make sure I locked my phone each time I put it in the case.

The quality of the case is first-rate. The inside of the case has a cushioned lining so your device will never be scratched and it does remove dirt and grit from the front and rear of the device. The stitching also looks very good, mine hasn’t begun to fray at all. 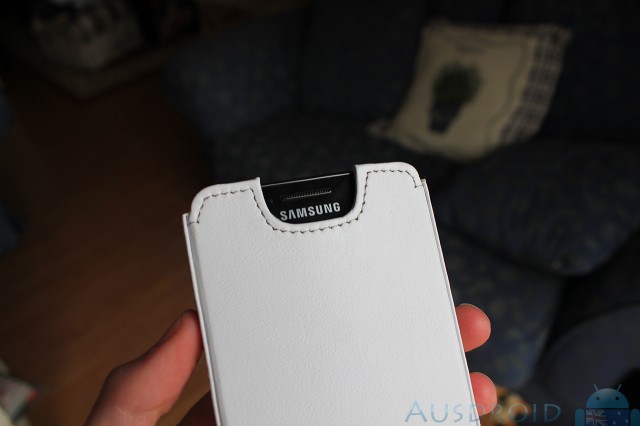 Not everyone is going to fork out $49.95 (at the time of writing this review) for a case, I would happily recommend the Aranez case to businessman and people who are just damn classy. It looks really, really nice, especially the white case for the white Galaxy S II. If you’re not worried about the price and just want one of the best cases on the market, I would recommend the Aranez case for you also.

Overall I was impressed with the Aranez case for the Galaxy S II. I would like to see a section of the case cut-out so you can access the volume rocker in a future iteration so you can put your phone on silent or loud and even turn up and down your favourite tunes whilst it’s playing in the case. We’ll be keeping an eye out for future cases for Android devices from Aranez in the future. We’ll be giving away the two we have in the coming weeks.

Hey Buzz and Team, thanks for your feedback and comprehensive review of the case. It is our first design for any type of Android phone and we are pleased with the response we’ve received internationally to date!I’ve just finished my first design of a case for the Samsung Galaxy Nexus. This time not a pouch but more like a mini-book wallet. I’ll send you some once it rolls off production.

Keep up the superb work and Merry Christmas to you and the boys.

One of the winningest attributes of the SGSII is that unlike a certain glass-ensconced fruit phone made from “premium materials”, it doesn’t need a case.  It’s a double win, considering how thin and light it is to begin with (again, unlike the fruit phone).
116 g vs 160 g (140 + 20 for the case)

Not a fan of the ones you slide your whole phone in and out of, too much of a PITA.

Reckon it’d fit the Nexus? If I win one that’s what’ll be in it! Looks really nice, good quality.

i’ll take the black one if you’re giving it away!!

Something I would actually use – and great to support Australian products!

Just curious to know before I enter to win this amazingly classy looking case, what is the inside made of? I’m just wondering since I don’t have a screen protector (never seemed to need one with the phone having it’s own pocket and everything) and I’m worried about trapped dust scratching the screen as it is inserted and removed.