Like many people, my first Android phone was a HTC so I was actually quite excited at the prospect of trading my Nexus S in for the Sensation XL for a week for this review. I have to say, it’s delivered on my expectations and added a bit extra in!

That’s not to say that this review is going to be an all singing and dancing “Hooray for HTC” type review, there are things about the phone that have frustrated and annoyed me such as the volume button being in a stupid spot which has resulted in me turning the volume down while in call multiple times. I’m yet to find the perfect handset so I’ve dived into this one boots and all. 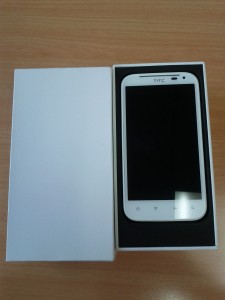 My initial feeling while unpacking the device was that this is a nice looking device, it’s a clean presentation with minimal bezel which maximises the usable screen space. The phone at first felt a tiny bit too big in my hand, but it’s grown on me. I have concerns with white phones that they mark and age poorly, so given the option my personal preference is always going to be a black phone.

The size of the physical handset will probably be a problem for (not trying to sound sexist here, just a reality!) some women, particularly more petite women with small hands as it will be very awkward to hold the phone during a phone call. It’s a very delicate balancing act with phone size these days though, when you consider that people are using their phones more and more for both work and social connections. Email, Facebook, Twitter, G+, Flicker and more! So for some users, the difficulty of holding a large phone during calls for some people may be overridden by the convenience of a slightly larger phone with a large screen for these applications.

The data speeds have ranged from great: 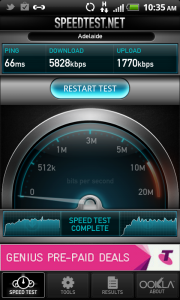 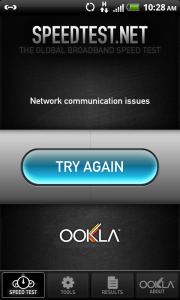 Unfortunately (I don’t like doing this) I believe it’s a reflection on the Vodafone network in my area rather than the phone hardware itself. I was really impressed with the reliability of the data stream when it was functional, I streamed a youtube clip of considerable length with no issues of lagging and buffering during viewing.

I could go on for some time about the display, it’s vibrant, crisp, stands up well to varied light conditions and is very easy to read. BUT… it’s only 480 x 800 resolution which being honest, makes it sub par for the current generation of phones. I gave this one the ultimate test though, I handed it to my Mum to have a look at. She was quite complimentary of the (out of box, stock setting) font size and the ease of reading what’s on screen, even without her glasses. So for receiving that feedback from a user that would fall into the “tech savvy” user group, well done HTC!

I took the time to watch a couple of avi video’s and was really pleasantly surprised with the playback capabilities of the phone. It’s smooth, clear and displayed no obvious signs of lag within the display.

Like with the screen, a single core 1.5GHz processor (although adequate for your average Mum’s and Dad’s) really isn’t meeting market standard or the expectations of high end users. For a single core processor, it’s snappy, very snappy and it performs well on multiple games, plays video extremely well and day to day tasks are no issue but I can’t help but wonder what the phone could do if it had all the trimmings.

After having used the phone full time for a week now I’ve not noticed any lag due to the processor lacking grunt. Even when I loaded a large number of apps in the background and tried playing games, there was no major notable lag in the display or functions on the phone only a couple of minor holds while loading.

I’d really like to be able to say that the camera is really nice, and that it’s possibly the winning point over similar spec phones. The fact is, the camera is possibly a deal breaker for anyone that does a bit of homework prior to purchasing a new phone. While the colour reproduction is quite good, the shutter is slow, the focus is poor and the zoom is digital. This would have to be one of the worst out of box camera experiences I’ve had with a phone in a very long time.

In a society where camera phones are often people’s number 1 device for capturing those gorgeous, candid moments that happen those who rely on the camera in this phone are going to be left disappointed. Particularly with kids around, you may only have seconds to grab your phone: point and shoot, but the focus on this is too slow. If you’re lucky to get it focussed quickly, the movement of your hand to take the photo may actually be enough to force the camera to refocus and miss “that” photo.

Finally, I was disappointed again by the poor response of the camera to varying light conditions which is clearly evident in the video below. The capacity of the battery is 1600mAh which is very much the middle ground in batteries, nothing spectacular but certainly not the lowest out there. I’ve hammered the phone, running Google Music, email and various other applications I would otherwise have run on my PC and still got a full day out of the battery and managed to get 2 full days of “normal use” without the need to recharge.

So I don’t get smashed with queries of “what is normal use, for me “normal use” daily includes:

An interesting note is that the Sensation’s battery seems to last better when connected to Wifi rather than running on 3G data, although given the current state of the Vodafone network it’s probably more a reflection on them than the phone itself, ie. constant changing of towers destroys your battery life very quickly.

Very much as you would expect, HTC have always delivered good quality phones in my experince and the telephony experience with the Sensation stands up to that expectation. The audio quality, both of the physical earpiece in the phone and the quality when connected to a bluetooth car kit were excellent. The dialer is a very familiar and very comfortable HTC Sense feeling dialer which is responsive, predictable and very easy to use including whilst searching through extensive address books.

There was only 1 call I made during my time with the phone, which I had to call someone back due to poor call quality. Again, I believe this to have been a reflection on the network that we were on at the time of the call rather than they fault of the Sensation itself. Overall the phone function in the Sensation is very much what I expect from smart phones these days and I can’t say enough good things about it. They live up to the hype, they sound great and they look slick. The the high range is clear, the mid range is crisp, the bass is deep and powerful. I listened to a variety of music from Jazz, Techno, Rock and Metal and the response from these headphones was great across all of these. I’m truly impressed, to a point where I am likely to buy a pair when I next need headphones.

Like I said earlier in the review, like many people an HTC was my first Android phone so there is a strange comfort and familiarity in the HTC home screen and the HTC Sense launcher. Since I parted ways with my Legend running Froyo, HTC has come a long way! The Sensation XL runs Android 2.3.5 which is a bit behind the times currently but don’t panic: As Buzz previously posted – HTC Confirmed that the Sensation XL will get updated to Ice Cream Sandwich HTC Sense 3.5 – What is there to say about it?
It’s HTC Sense…
I don’t think any genuine Android Enthusiasts will stick with it for long because there are too many niggling little issues that will annoy users who like to have that extra bit of control over their phone, or rather don’t want their phone thinking for them. But for a stock launcher, on a phone that’s aimed more at the first time Android users or Mum’s and Dad’s who are getting a new phone on contract it’s solid, reliable and has features that will impress new users to Android.

For a single core processor, this device does a great job of performing through what would be normal use for an average user. To give a comparison baseline we use 2 apps that measure the performance of the device:

While these are not necessarily an accurate indication of the true performance of the device, it provides us and you with a baseline comparison between devices.

I can’t honestly say I would buy or use this device as my own but I do like it. It’s solid, reliable, has a really good (not brilliant) screen and given what I put the phone through across the last week I’m genuinely impressed by the battery life it has displayed during this review. HTC have done a really good job with this phone, both on the hardware and the software side of the device. Physically the device is pleasing to the eye and despite being a little on the large side has a really nice, comfortable feel in your hand.

It’s one of those devices that’s on the cusp, not quite good enough for true enthusiasts who do their research to purchase, but a great phone none the less. Your tech savy users who aren’t into rooting, hacking and flashing their phones but want one that’s reliable and still fits well inside the Android Ecosystem will love this phone, just not the camera.

All phones battery life seems to last better when connected to Wifi rather than running on 3G! This is nothing new!

Yet it performs better than the OG Sensation or the XE.
You mad?

I have a galaxy s2 .. so I really don’t care about slower out of date phones.. aspecially phones that have limited on board memory like the sensation.. so no .. I’m not mad. 😉 Considering the first quad core phones will hit the market in the next 6 months I’d easily say that single core phones are out of date yes.

Out of date, yes.
Doesn’t necessarily mean it’s crap for everyone.

And quad-core, shmad-core. You’d better hope the swarms of idiots buying the first phones released next year because they have “moar corez”, are left with an unoptimised steaming pile of shit with a locked boot loader.
Great review anyway, Phil. From my own brief use of the phone and actual users’ findings, the same conclusion is found. Big ticks for the screen and performance, although the camera is disappointing.

Dude, no offence but learn to spell or get a spell checker plugin for your browser.