Editor’s note: This is an opinion piece by one of our writers, Dan Tyson.

The Nexus platform is a reference platform. It is what Google sees as what a phone should be, it is usually the phone that gets the Android software update first and is used by an ever increasing range of people. When the Nexus One was released it was a phone for the Devs and Modders, but it was soon discovered that the hardware was far more advanced than what other manufacturers were delivering. With the release of the Nexus S the brand became even more mainstream as it was nearly indistinguishable from the Galaxy S, until today, where we have the Galaxy Nexus. 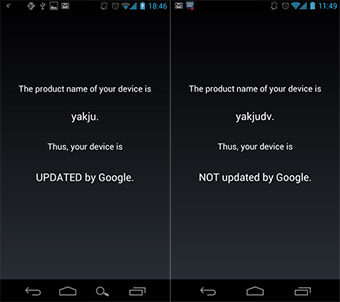 The Nexus brand is now recognised. Like it or not the Nexus is now a mainstream phone. It’s definitely still a platform that is infinitely configurable — the bootloader just asks to be opened and ROMs flashed to it. However, with the Nexus now being recognised and all the carriers selling it, we now have to take into account the novice user who basically wants to get a phone that is made by Google and is what Google imagines a phone to be. This includes getting updates, which brings us to the Yakju vs Yakjudv debate.

Google has released effectively 2 versions of the Nexus: Yakju, which receives its updates directly from Google and Yakjudv, which is updated via the manufacturer (Samsung) and then carrier (for ‘testing’) . The Yakjudv is no different to what Vodafone Australia did with the Nexus One and Nexus S. Updates for these phones seem to take an age to come out compared to their American cousins.

It is relatively easy to unlock your bootloader, boot into recovery and flash a ROM, but should you have to? My opinion is NO. Google should maintain some semblance of purity in their Nexus phones, all their phones should receive updates as they are released from Google. No-one should have to flash the phone. What the Nexus brand should be is a tiered structure of release where Google controls it all and we see what Google thinks a phone should be.

The Nexus should also be open. Being a reference platform the Nexus should be as open as possible; the bootloader should be as locked as a screen door with the fly screen ripped to shreds. But Google does need to maintain a consumer focus and seeing as all the major manufacturers insist on skinning the hell out of their phones, we require Google to keep the phones pure. This means controlling the updates.

Google, your OS was essentially ready to release on October 19 when you announced it in Hong Kong at All Things D; you had Nexus phones in the hands of your employees and they worked pretty well apparently. What you should be doing is picking the top 100 developers from the market and supplying a Nexus Phone to them with the source code — make them sign the hell out of Non-Disclosure Agreements but get the software/hardware to them so they can start making their apps compatible with your new OS so that on release we don’t get issues loading our favourite apps.

Give us a release date

The announcement of the Galaxy Nexus and Ice Cream Sandwich was better than previous announcements; Mattias looked sharp in his white suit; and we all got excited for the new features. What we then had to do was wait a month with NO information in regards to when we could actually see the phone. ‘November’ we were told without any specifics — it was actually November in 1 market: Europe. Technology today is global, we all want it and we want it now.

The advantage Google has is that you have a top-tier handset manufacturer making your hardware, these manufacturers are responsible for warranty, they have warranty systems in place in every country they sell in already. USE THEIR SUPPLY CHAINS, it costs very little have them release the phones in every country that they are already in, even if it’s just a small amount, considering the large number of people who ordered in from the UK on release, that money would be better off in Google and your manufacturer’s pocket.

One version to rule them all Seriously, Verizon can go get stuffed [edited], being an Australian I will never use them as a carrier and if I was in the US I would boycott them after the shenanigans they pulled with the Galaxy Nexus release. Android is at the point where it is an actual feature in itself, people are starting to recognise Android, they want it on their phone, specifically their Nexus phone. Leverage this, tell carriers where to go — re-open your google.com/phone store if need be, but this time — as I said before — utilise the manufacturers existing supply chain and release globally, you will sell a metric shit-ton of phones, I guarantee it.

Just had to get that off my chest. I realise that I have probably over looked many, many different things but I feel that with Android leading the mobile industry in handsets sold at the moment, Google needs to start recognising their own success and leverage it. I look forward to reading your comments.

I feel there’s more Samsung in this release than past Nexus releases. The phone is the Samsung Galaxy Nexus, not the Google Galaxy Nexus. Samsung doesn’t have a presence at retail. They supply the hardware and other people sell it to customers. Samsung couldn’t just bring a new phone to market in Australia – where would they sell it? None of the carriers’ shops would sell it as the device is unknown and foreign to them. It would also need to be certified, which probably also ties back into something to do with our carriers. I too would like to… Read more »

totally agree.  that’s said, i understand why yakjudv exists. by getting a subsidised phone on a plan from a carrier you are establishing more of a relationship than you would from just buying a phone outright and using the carrier as a big dumb pipe. carriers have to provide technical assistance and a 24 month warranty on the phones that they sell, so its understandable that there is a stage at which carriers have the ability to check and ok the update before releasing it ota.  with all three carriers selling the galaxy nexus, you would hope that there would… Read more »

“Have to provide a warranty” my butt. You pay for a warranty with a monthly fee, or you get nothing.

Yeah, I’d like to see the online store being opened up again.  Android and Nexus as brand names are much bigger than a few years ago, so they’d definitely get some decent sales from there now.

I have to agree with you on pretty much everything here…. and i feel pretty strongly about it too- people who aren’t modders are buying Nexii because they are meant to be getting updates of pure android first and early…. fail number one by google. Fail number 2 is the Galaxy name.  Galaxy is a commercial name of Samsung- is it a Google nexus phone or a Samsung phone- i just feel Google have sold out far too much on this phone (including the small amount of bloat they allowed Verizon to install on their nexus) … As for the… Read more »