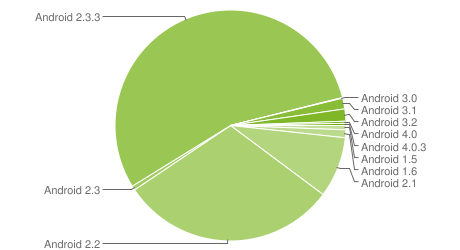 The Android developers blog has posted an update which gives a snapshot view of the current distribution of Android versions across devices which access the Android Market. The snapshot is for a 14 day period which ended on the 3rd of January which takes us across the christmas period which saw 3.7 million devices activated over the 2 day period which covers Christmas day around the world. Gingerbread took the lions share of the pie with 55.5% of devices running a 2.3.x version of Android and followed by FroYo devices at 30.4%.

Ice Cream Sandwich has made its first appearance with just 0.6% of devices running Android 4.x, this would take into account the Galaxy Nexus devices sold since they were released in the UK in November and the US last month and also the upgraded Nexus S units out there who can either manually download the update or wait for an OTA update from your carrier.

Interesting to note that devices running Ice Cream Sandwich now equal the number of devices running Cupcake(remember that these are devices still accessing the Android Market) and Donut is still more popular but i`m sure that these stats will change quite quickly with more devices being released and more Nexus S units receiving their upgrade. Anyone out there still using a phone runing Cupcake or Donut?

4.0.3 devices comprise 0.3% so half of all ICS devices. Is that what you were after? Check out the source link 🙂

Depends on your Device, check out XDA-Developers or RootzWiki for custom ROMS or if you`re talking about for your Nexus S instructions are here : http://ausdroid.net/2011/12/17/android-4-0-ice-cream-sandwich-rolling-out-to-gsm-nexus-s-download-it-here-now/

I did think about it but I personally believe CM9 and AOSP builds of ICS for other devices would probably be a fairly minor component of the 0.6%, that will significantly increased when CM9 etc builds exit Alpha/Beta stage of courses, but yes, however minor they would make up part of the 0.6%