Huawei have announced two new Android smartphones over at CES and unlike most of the announcements taking place there, these devices, the Huawei Ascend P1 and Ascend P1 S, are actually coming to Australia. The release date given to us by Huawei Australia is April 2012 with no partners announced just yet.

The Ascend P1 S is actually a fairly nice looking device — mainly because it seems to be riffing off the Galaxy S II — and it has the specs to boot.

The Ascend P1 mimics the specs of the Ascend P1 S expect for a smaller 1670mAh battery and is slightly thicker (though still thin) at 7.69mm. 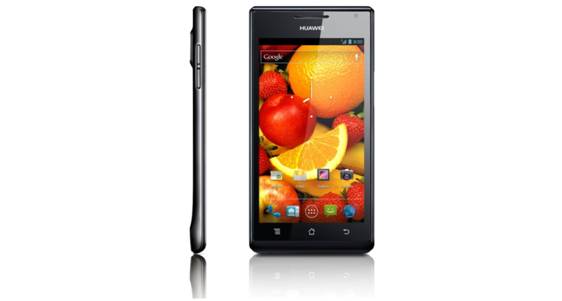 The devices will come in three colours: metallic black, ceramic white and cherry-blossom pink with more colors to come. Huawei says they’ll match your personality and whatever you’re doing — quite frankly we’d be happy with just black and white, but choice is always nice.

Huawei never seem to disappoint when it comes to pricing as well, though nothing has been announced just yet, we’re not expecting you to have to sell a kidney (or any other body part) to buy yourself an Ascend P1 S — also credit where it’s due for putting Ice Cream Sandwich on the device at launch.

Contrary to all the comments to date – this seems to be running a vanilla ICS possibly making it nearly purely a “Google” phone. If that is the case then updates should be routine – let alone the fact that it is running the latest Android anyway and there is no “update” on the horizon anyway.
Also Huawei are claiming 13hr talk time!
Finally the thicker phone is to accommodate 4G – don’t know if that will be offered in Oz.

Impressive package, if the price is right it could be a modders favourite even if Huawei doesn’t provide updates,…

:/ Problem with the  Huawei phones is they dont seem to get upgrades. though so far the specs on the phones have been pritty basic. maybe this one will break the mold

and by that i mean OS updates

so the fatter phone has a lower spec battery ! … defies logic, unless the $$$ difference pulls logic back into place

Yes, I imagine the slightly thicker version will have a cheaper price tag attached.

Are you sure? Anand Tech is reporting it the other way around, with the S being thicker and having the larger battery, while the P1 is thinner (6.6mm? really?) and has the smaller battery.

Here’s a video of both phones http://youtu.be/ftdO-a6fMIQ?hd=1 Might be worth embedding?

Thanks for the clarification Buzz.

Very excited about this phone (either of them really). If they can get it to market sometime in the first half of 2012, and price it around $300 retail, they have a real winner on their hands.

I’m very glad to see the likes of Huawei and ZTE pushing the price boundary all the time and keeping the big boys honest. And comparing this to the IDEOS 8150… Huawei has come a long way in a very short time.

I have reservations about Huawei the company… but their smartphone division is doing very well.

Not a fan of all those logos on the back, it’s too much clutter and looks especially horrible on the yellow version.