It’s not all that often that a high quality app is available exclusively to Android (well initially anyway), but the people who brought Flash to Android now bring you six more of them in the Adobe Touch app family. Adobe Touch apps are a suite of creative apps designed for tablets, but not restricted to them, since you can share files through Adobe Creative Cloud allowing you to share work between your tablet and Adobe Creative Suite software on your computer. These apps will not appeal to everyone but they will be very popular with the creative types who need access to these powerful tools on the go.

Photoshop Touch offers many of the features found in the desktop version, allowing you to work on files you’ve saved to the Cloud, photos taken with your tablet’s camera or any other files saved locally. Interactive tutorials are available for the beginner, such as myself, to guide you through the many features this app has to offer. Make use of layers, selection tools, adjustments, and filters to perfect an image before uploading it to Facebook or saving it back to your computer via Creative Cloud. Photoshop Touch will be incredibly useful for people familiar with the desktop version to touch up photos on the go or continue work on a project, however never having used Photoshop before (yes I know, i’m a noob) I found the app a bit complex for the new or casual user. Proto is for the website or app developer, allowing you to plan out a wireframe or prototype on a touchscreen. Having never used something like this before I actually found it quite intuitive and can see how it would be very useful to plan out a webpage or mobile app. You can start with a blank sheet or take advantage of the preloaded popular CSS grid systems to add menus, tabs, accordions and more. The interface is also very easy to use for the new user. Ideas is basically a digital sketchpad, you can use your finger (or stylus) to create and draw pretty much anything, limited only by your creativity. For me, that limit is a very ordinary sketch of a house that won’t win any awards, but here is an example of what someone with some skill can create. Debut is a presentation tool for Photoshop, Indesign and Illustrator files with the ability to markup your designs with notes and feedback. The app can access high-fidelity renditions of PSD, AI, or INDD files, and also open PDF, JPEG, PNG, and GIF files directly. Collage reminds me a little of Microsoft Note, you can create a ‘moodboard’ by combining images, drawings, text, and files from other Adobe apps. Take an idea and flesh it out through pictures, text and sketches, then share it to your colleagues via Creative Cloud. Kuler is for the decorator or creative designer, helping you to create a colour theme from scratch or from existing pictures. You can select a few colours from the colour wheel then refine them with the available tools including color sliders, a color wheel, brightness control, and numeric values. I took a photo with the camera and the tool identified the major colours and suggested others which complemented them, very useful for anyone redesigning the interior of their house. 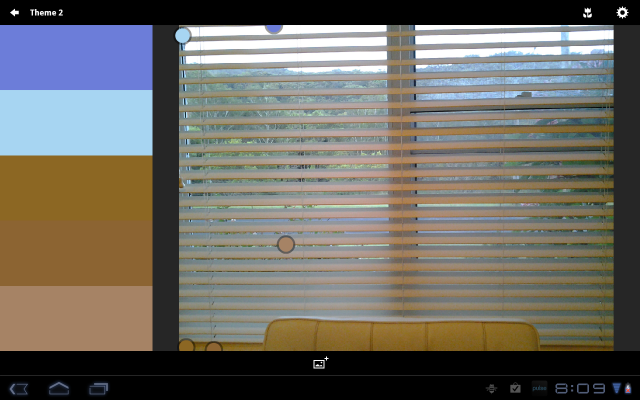 The Adobe Touch Apps are available now on the Android Market for AU$10.49 each which will represent fantastic value for some, but not really be of any interest to others. While I didn’t use these apps to their full extent, they did perform well on our Galaxy Tab 10.1 although some lesser powered tablets may struggle or lag on the more intensive apps. Adobe have taken another step towards making the Android tablet more than just an entertainment device, but a true productivity tool.

I’d love these on my Galaxy Note!

All of these bland noo blight and slimey Adopey (cr)apps were made to ignore tablets not running Honeycomb at a minimum. Nice of Adopey to say ‘Stuff you’ to any Android tablet user who doesn’t have the latest and greatest tablets.

Any tablet not capable of running gingerbread, at least, would not be suited to run such CPU/GPU & Memory intensive applications.
They’ve done so for a reason. They don’t want negative feedback for crappy performance on substandard tablets.

I’d be curious as to how this would run on my Touchpad with CM9, once CM9 is fully usable. Sounds like brilliant value for money!